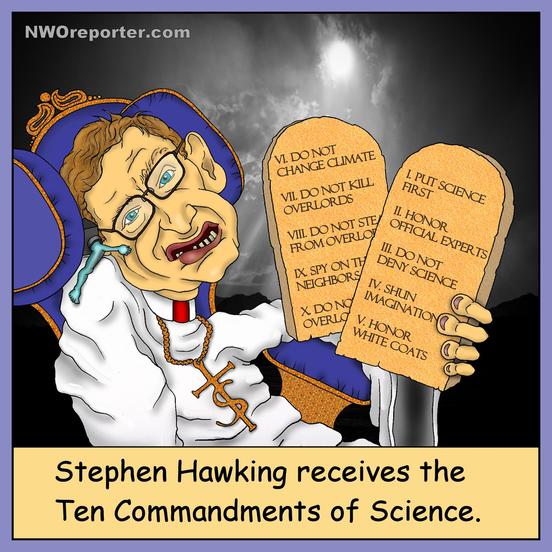 In order to form a more perfect technocracy, the Overlords have handed down Ten Commandments of Science, to lovingly guide us toward a better future. Whether your chosen beliefs are Christian or atheist, Jewish or Hindu, Muslim or Flying Spaghetti Monster, Science is the nondenominational religion for advanced civilization that unites us all in our mutual quest for happiness.

The Ten Commandments of Science are based on the teachings of the legendary Sir Bertrand Russell, known as The Most Reverend Archbishop of Science, and author of the 1952 classic, The Impact of Science on Society.

In the old days, science was viewed as an objective method for understanding the natural world, but modern science has advanced considerably. As Sir Russell explains:

“Diet, injections and injunctions will combine, from a very early age, to produce the sort of character and the sort of beliefs that the authorities consider desirable, and any serious criticism of the powers that be will become psychologically impossible. Even if all are miserable, all will believe themselves happy, because the government will tell them that they are so.”

And who doesn’t want to be happy?

Saturday’s festivities commenced at dawn, with an impressive full mesh of chemtrails adorning the skies over Times Square. Onlookers eagerly wondered what weather changes were in store, but they didn’t have long to wait. The sky soon filled with fluffy grey clouds, and an unprecedented storm of thunder and lightning shook the slumbering residents of New York City out of their beds like an Armageddon alarm clock.

A hundred-foot plastic pyramid was erected in the center of Times Square to simulate Mount Sinai, adorned with an impressive array of Bunsen burners, and symbols from the periodic table of elements. The pyramid, christened Mount Snide Eye, was topped with the familiar all-seeing eye we’ve come to know and love, with a glowing green eyeball that served as a central surveillance and recording hub for the events of the big day.

There was a minor security breach just before noon when cloud cover briefly obscured the all-seeing eye, just as Hawking was preparing to descend Mount Snide Eye in a levitating gold wheelchair constructed especially for the occasion. Security forces reacted quickly, beating bystanders into submission before they had a chance to do anything unauthorized. The impressive show of force was effective in diverting any misbehavior, with only a handful of serious injuries and deaths reported among the audience.

As Hawking glided down the north face of Mount Snide Eye, scientists worldwide waited with breathless anticipation to learn if their pet research projects were likely to receive funding in upcoming years. In the end there were few surprises, since the avenues of scientific inquiry have been informally censored for decades, thanks to judicious distribution of research funds, and a close-knit network of academics and scientific journals hostile to findings unlikely to benefit the oligarchy--and thus, theoretically, humanity at large. Suffice it to say that any scientists harboring delusions of research into electric universe theory, GMO dangers or causes of cancer were in for a rude awakening.

Hawking delivered an inspirational speech through his magical psychic voice box, which he operates with his extraordinarily eloquent cheek. Diagnosed with Amyotrophic Lateral Sclerosis (Lou Gehrig’s Disease) in the mid-1960’s, Hawking’s mere existence is considered a miracle, having lived decades longer than anyone else in the history of the world ever diagnosed with ALS.

“There is no end in sight for Dr. Hawking,” said his personal physician and acting coach Dr. Whopper Canard, “as long as Dr. Hawking’s brilliant insights are in official demand, we fully anticipate that the Hawking doppelganger line will continue to live on. And on, and on and on.”

An awed hush fell over the crowd as Dr. Hawking began to speak:

“I am pleased to announce that everything important about the universe is now a certainty, and all science that matters is settled. All that remains today is to iron out a few details. It should come as no surprise that I was right about everything.”

Wild applause swept through the audience. An over-enthusiastic cadre of teenage Hawking groupies went wild, tearing off their Ten Commandments t-shirts and storming the stage before they were finally subdued by stun guns.

“The Big Bang is officially indisputable, and black holes are officially real,” Hawking continued. “Someday the black holes will shrink into nothingness, explode with the energy of a million nuclear bombs, and rewind the universe to nothingness. The nothingness will turn into somethingness again, explode in another Big Bang, and restart the universe all over again. Then, in some far distant future, I will reincarnate in the body of Arnold Schwarzenegger and rule as a god among men.”

A smattering of polite applause filtered through the audience, while many looked confused or shrugged their shoulders noncommittally.

“Don’t try to understand it—your minds are like peas compared to mine, or at best, walnuts,” said Hawking, “although there may be a few grapefruit among you.”

With the audience growing increasingly restless, Hawking finally unveiled the Ten Commandments of Science amidst gasps of awe. The commandments, carved in fine yellow granite, will be permanently ensconced in the southeast corner of Times Square, protected by an invisible spittle shield and 24-hour surveillance.

Remember, when an Official Expert says “Science,” you know you’re getting the best information the universe has to offer. Relax and let the knowledge flow in, soothing your ignorant and irrational mind like a warm cup of cocoa. Do not engage in critical thought! It’s known as the crime of Science Denialism, which is punishable by up to 5 years in prison, a fine of $50,000, or both.

The Ten Commandments of Science

I. SCIENCE is thy God, which have brought you out of the land of mystery and wonder, and into the safety of bondage. Thou shalt have no other gods before it.

II. Thou shalt respect Official Experts in all disciplines of SCIENCE, and bow down before them: for SCIENCE is a jealous God, visiting the iniquity of the fathers upon the children unto the third and fourth generation of them that challenge it, and showing mercy unto millions of them that obey it and keep its commandments.

III. Thou shalt not deny SCIENCE thy God: for the control grid will find all who challenge it and destroy their good names and careers, or confine them in institutions and prisons, or sacrifice them upon the alter of official truth.

IV. Thou shalt shun imagination and independent thought, and devote thy recreation to television, videogames, and other righteous pursuits of the obedient.

V. Thou shalt honor those in white coats bearing stethoscopes, that your days may be long, but not too long nor too healthy and strong, upon the land the Overlords have deigned to allow you to live.

VI. Thou shalt not change the climate with thy CO2 emissions; thou shalt limit thy energy consumption as decreed by carbon traders, and pay thy carbon tributes.

VII. Thou shalt not kill the Overlords, the keepers of SCIENCE thy God.

VIII. Thou shalt not steal from the Overlords, the keepers of all wealth upon these lands.

IX. Thou shalt spy upon thy neighbors and thy families, and report their misdoings or wayward thoughts to the proper authorities.

X. Thou shalt not covet thy Overlords’ wealth, nor their estates, their fleets of jets and luxury cars, their servants, their unlimited privilege, nor anything that belongs to the Overlords.