“When the imagination sleeps, words are emptied of their meaning.” —Albert Camus

“I believe in intuition and inspiration. Imagination is more important than knowledge. For knowledge is limited, whereas imagination embraces the entire world, stimulating progress, giving birth to evolution.” —Albert Einstein

“But imagination gives us the sweet music of tiniest insect wings, enables us to hear, all around the world, the vibration of every needle, the waving of every bole and branch, the sound of stars in circulation like particles in the blood. The Sierra canyons are full of avalanche debris—we hear them boom again, and we read the past sounds from present conditions. Again we hear the earthquake rock-falls. Imagination is usually regarded as a synonym for the unreal. Yet is true imagination healthful and real, no more likely to mislead than the coarse senses. Indeed, the power of imagination makes us infinite.” —John Muir

“Reality can be beaten with enough imagination.” —Mark Twain

“The world of reality has its limits; the world of imagination is boundless.” —Jean-Jacques Rousseau

“The imagination is not a state: it is the human existence itself.” —William Blake

“One group, one collective, one unified species—consider the tonnage of propaganda that has been poured into that formula, in order to convince populations that elites want the Good, rather than what they really want: Control. What if the universal concepts of One Space and One Time in One Continuum is, likewise, a basic fraud?” (The Underground, Jon Rappoport)

“In the face of crises, people keep saying, ‘What can we do, what can we do, what can we do?’ And I keep saying, the real target of that question is the person asking it. He’s asking himself. I’m not demeaning solutions and staunch groups that are already out there. But I’m saying that the individual, by tapping into his own imagination, is a further solution. Imagination is the ultimate wild card. There are many answers and solutions and actions that haven’t been dreamed up yet. To ignore this fact, to remain out of touch with one’s own imagination is the worst possible idea.” (The Magician Awakes, Jon Rappoport)

Hi again, folks. This is your friendly reality salesman, back for another reminder.

In my last message, I mentioned that all the inhabitants of Earth are due for a booster shot of our massively popular Perception Package. These updates occur every 20,000 years.

Our superior product gives you stability, reliability, and a basic foundation of unchanging reality.

Last time, I also mentioned that imagination was the fly in the ointment. Don’t venture into that area; if you do, your Perception Package will deteriorate and lose force.

You may even begin to see “other spaces and times,” and what good is that? No, stick with what you’ve bought, and you’ll remain happy.

Limits make lives. You can fiddle and diddle and experiment within the boundaries of the Package. You can put your faith in all sorts of fairy tales. But in the end, it is your perception along a severely restricted arc of the potential spectrum that gives you comfort and security.

Think of our Package as a gated community, where all your needs are met on-site. Why venture out? Why visit strange places? You’re safe right where you are.

I want to make a clarification re our Information Brochure 405-A2, which, as you know, goes out to all 10 billion subscribers on Earth. A statement on page 567, paragraph 4, has caused a bit of confusion. It reads:

“On other worlds, the inhabitants may perceive space and time differently, but that is because their environments and circumstances vary…”

We received a number of queries about how the perception of space and time could possibly differ from world to world. For example, one person asked, “Are not space and time the same in all places and times?”

The answer is: space and time are functions of perception. Otherwise, why would be selling a Perception Package?

Yes, other experiences of space/time are possible. But for you, the result of treading beyond the Package we have provided is disorientation and danger.

We have calculated “how far you can go.” That is our genius. Trust us. You don’t want to test the limits.

At this time, we are working closely with Earth governments to identify and rescue those who have strayed. Those souls need help, and we are determined to bring them back into the fold.

Life as it exists for you is a series of systems, nothing more. Our Package integrates with these systems. It’s a perfect fit.

DON’T EXPERIMENT WITH THE PACKAGE.

Doing so is symptomatic of a serious disorder.

Our repair and re-ed groups are currently expanding their reach across the planet. Contact us if you sense a problem. Report others who may be in trouble.

We are more than a manufacturing and sales organization. We are dedicated to the Good of All.

That dedication keeps us strong in the face of any disruption in service.

Our trained technicians are available 24/7 to take your calls and initiate program reconfigurations.

Remember our first principle: Perception makes the world go ‘round.

Signing off for now. Enjoy today. No matter what may befall you, you’re operating at the optimum level, all things considered. Accept things as they are. This is true enlightenment. We should know; we invented it.

Part 2: The Reality Salesman Makes a Housecall reprinted here with permission of the author.

The Reality Salesman Makes a Housecall

Image by Paul Klee, "Ghost of a Genius" [PD] 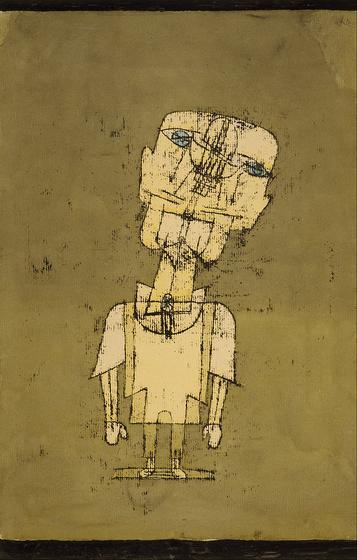