Follow @NWOreporter
JOIN OUR FREE EMAIL LIST!
comments powered by Disqus
…For a moment, a person sees beyond the picture of his own reality. He sees huge open space. He knows he can act on the basis of an inner leverage. He knows he has great power.

Step up, folks. This is a deal you can’t afford to miss. You know that thing you cling to like a drowning man in a turbulent sea?

It’s called reality, and I represent the company that manufactures it. I’m proud to say I’ve held this job for over a hundred thousand years. So as far as product knowledge is concerned, you just aren’t going to find anybody like me.

And in conjunction with that, I’m really selling…guess what?

I’m selling How You See Things.

Because, no matter what time period you live in, it all comes down to that: how you see what’s in front of you.

And believe it or not, perception comes in different forms. My company makes the perception that endures. It’s the package you’re living with right now. It’s the down-to-earth here-it-is straight-ahead common-sense type. We call it: IT IS WHAT IT IS. That’s trademarked, by the way. ISWII. It is what it is.

ISWII was invented by a very smart guy whose name has been long forgotten. He was a flaming genius, and he realized something great. People would go for ISWII because it would lock them in.

Who wants to wake up on a Tuesday morning and suddenly see life in a completely different way?

ISWII is the most popular perception package in the universe, bar none. It has Reliability. Consistency.

All those centuries and epochs ago, when I was a rookie training for this job, the guys let me try on a whole bunch of different perception packages, so I could see what kind of competition I was up against.

I saw foolish things, ridiculous things. But when I was given ISWII, our product, I felt like I was home.

ISWII gives you a stability you can count on for your whole life. And, believe me, that’s no small feat.

ISWII is time-tested. It’s as solid as solid can be. It doesn’t break down.

But it does need vaccine boosters from time to time, and that’s why I’m here today talking to you.

Every twenty thousand years, we institute a planet-wide upgrade, just to make sure nothing goes wrong. And you’re all due.

Now, you could refuse, in which case you’ll have to take full responsibility for the ugly consequences, or you could do the right thing and just re-up. I have to tell you, our re-up rate is 99.859 percent. I’m proud of that figure.

In the small print, the contract lays out a few details concerning IMAGINATION. This is for your own protection—because if you take imagination too far (and who knows how far that is, until it’s too late), you’ll set up what we call an interference field, which means ISWII will tend to malfunction. You don’t want that.

So here’s the contract. Sign on the dotted line, and we’re done.

Thank you very much.

I love you guys. Really, I do. I admire your tenacity and your willingness to stay with our package. Our company continues to prosper because of you.

THE PLEDGE: “I promise not to mess with the perception package. If I believe someone is operating outside the boundaries of the package, I will shun him. If I myself stray, I will turn myself in and receive treatment. All hail to the ISWII perception package!”

The reality salesman knows what he’s doing. He makes a very good living. Secretly, he knows our perception of our own lives and futures is grossly limited by his product, just as our eyes can only see part of the light spectrum. He is aware of this.

The Reality Salesman Makes a Housecall reprinted here with permission of the author.

The Reality Salesman Makes a Housecall 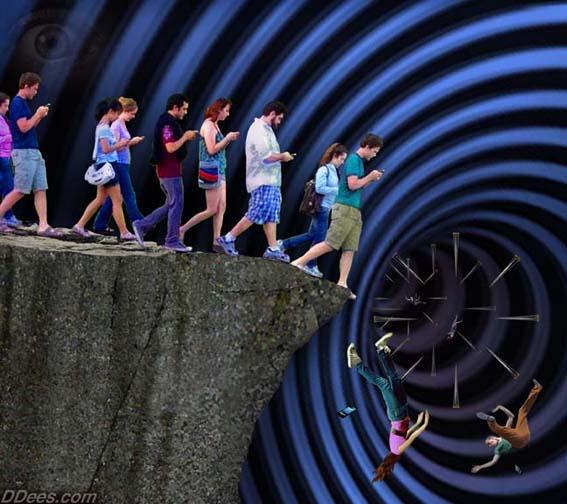