The 2016 election was the most contentious in U.S. history. That is, before surprise write-in candidate Jay-Z crushed Democratic frontrunner George Clooney in the 2028 election. Pundits attributed Jay-Z’s shocking victory to the well-timed release of his blockbuster rap album “Jay-Z for President.”

High hopes had been placed on Clooney in 2028 to revive voter participation from near zero levels--and it worked, but only in California, New York and D.C. Voter turnout in those states was nearly 100%, almost all of them voting for Clooney. But with a mere 64 people in the rest of the nation voting, all writing in Jay-Z, Clooney didn’t stand a chance. Clooney won the popular vote with almost 59 million to Jay-Z’s measly 64 votes. But Jay-Z took the win in the electorate with 451 votes to Clooney‘s 87, in the most statistically improbable but mathematically possible election victory in our nation’s history!

The epic 2016 election pitted billionaire businessman and reality TV star Donald Trump against globalist golden girl and seasoned political sleazebag Hillary Clinton. Now, thanks to a Freedom of Information Act (“FOIA”) request by The NWO Reporter, we’re going backstage to see what the 2016 election puppet show was all about!

Our FOIA request revealed the 2016 election theater was the brainchild of a production company called the Banking Cabal, and was directed by a shadowy group known as the Intelligence Community, whose names were redacted for reasons of national security. Post-production marketing was managed by the late billionaire overlord George Soros, whose already unimaginable fortune mysteriously multiplied a thousand fold in the four years following the election.

Code named “Operation Shocked and Appalled,” the 2016 election employed the traditional strategy of divide-and-conquer to bring the nation to its knees. The script was welcomed with open arms by the citizens, who were eager for any ostensibly worthy cause to jolt them out of their growing zombification, brought on by years of intensive saturation with television, gaming and ELF waves.

According to the script for the 2016 election, anyone who voted for the “wrong” candidate would be shunned as stupid, gullible, or just plain evil. And anyone who didn’t vote would simply be told to shut up. It resulted in stony silence from everyone who didn’t participate in the election theater, and a tidal wave of cut-throat contention between the Clinton and Trump factions that lasted for the duration of Trump‘s reign.

Key insights into the 2016 election script obtained from our FOIA request revealed that:

The post-election script uncovered by our FOIA request was a masterful plan for maximizing civil unrest. Teams of paid protesters from both sides were hired by the Soros team to foment violence, as well as raise cries of impending doom (Hillary supporters) and send nasty notes to anyone who wasn’t a white male (Trump supporters).

The Trump reign was slated to be a four-year plague of false flag events and hoaxed terrorist attacks, designed to prompt widespread demands for UN military forces to patrol the streets to “keep us safe.”

Meanwhile, behind the scenes of the post-election aftermath, following on the heels of Brexit, was a carefully orchestrated coup for the glorious global oligarchy, as panicked investors around the world dumped their holdings, only to be gobbled up by Soros and his intimate cronies for rock bottom prices.

Overall, the 2016 election was a huge winner for everyone who actually mattered. Rest assured that the global overlords are very appreciative of your participation in the landmark 2016 presidential election puppet show theater! 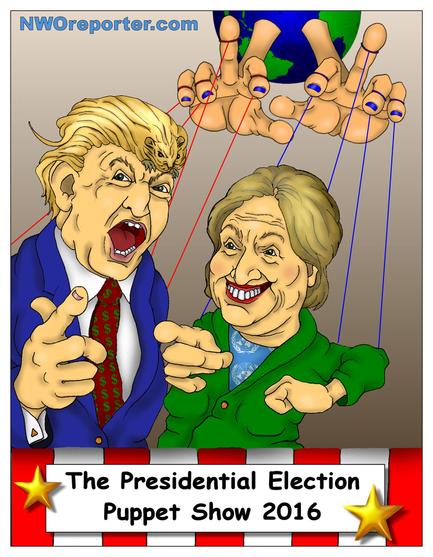