1. a person who poses as a customer in order to decoy others into participating, as at a gambling house.

2. a person whose praises, endorsements, etc., are motivated by self-interest.

AUTHOR'S NOTE: The following is a true account of events in the satirical reality of 2016. All the quotes

are genuine, and were copied from the UNICEF promotion pictured above on May 9, 2016.

UNICEF USA ran a campaign on Facebook last weekend to pledge vaccines for the needy. Judging from the reactions and comments, the Vaccine Church is in serious trouble.

One of the UNICEF promotions found its way to my Facebook wall. It was posted on April 28, and as of the morning of May 9, had garnered 157 "reactions"--and an amazing 42% of them were negative. There were 187 comments, and hundreds of replies to the comments. With the exception of a few very prolific pro-vax commenters, they were almost overwhelmingly negative.

Some comments and replies were only a few telling words; for example, "Vaccines kill.” Others were longer and detailed, with links to supporting articles and studies. The award for dark humor goes to this one:

Here are a few more examples of the anti-vaccine comments:

Naturally, the UNICEF promotion was infested with a few pro-vax trolls. A few commenters stood out as likely soldiers of fortune, with a mission to destroy vaccine heretics with insults, derision, ad hominem, and other tactics to minimize the possibility of civil and rational debate. Between them they logged 851 comments and replies, with one troll, I'll call her the Head Troll, logging an astounding 384 alone. Their comments included gems such as:

You get the idea. “Hysterical” and “hysteria” were the most popular epithets against anti-vaccine commenters, used 64 times, often followed by "screeching." “Stupid” was used as a descriptor 44 times, and 35 were deemed to be either an “idiot” or “dumb.” The ever-popular “debunked” was used 44 times as an excuse to avoid debating the evidence; but surprisingly, the classic “conspiracy” was only projected 20 times. Last but not least, 59 anti-vaccine commenters were accused of being a “liar” or “lying."

In other words, a typical conversation in the land of pro-vax Internet trolls.

There were, however, also a few civil and apparently rational pro-vaccine commenters on the UNICEF promotion. Among them was a woman named Dorit Rubenstein Reiss. She appeared to be just an ordinary concerned citizen, a polite, well-spoken advocate of vaccination. Nothing Dorit said would seem to indicate otherwise, except…

If you know who Dorit Reiss is, it is very unlikely she was just another ordinary citizen commenter. In fact, given her history, it is quite likely Dorit was instrumental in orchestrating the UNICEF vaccine campaign.

Dorit Rubinstein Reiss has an impressive history as a valuable asset of the vaccine industry. A Professor of Law at University of California Hastings College of the Law, Dorit graduated from the Hebrew University of Jerusalem, Isreal, in 1999, with a combined degree law and political science. She went on to earn a Ph.D. in 2007 from the University of California, Berkeley, in the Jurisprudence and Social Policy Program. She’s a member of the Board of Directors of the San Francisco Immunization Coalition, and a member of the Parents Advisory Board for Voices for Vaccines. Her CV is fully loaded with a pungent heap of conference presentations and publications extolling the virtues of vaccination.

A young mother herself, Dorit can often be seen in vaccine promotion campaigns cradling her apparently healthy and happy and fully vaccinated baby. Is she a true believer of the Vaccine Church, or do her motivations emanate from a much darker place? Only her pediatrician knows for sure.

Last year, Dorit put her impressive credentials to work by drafting a new law that had the entire oligarchy salivating. If passed, it would declare the unvaccinated a “public nuisance,” and hold them personally liable for the government’s expenses for meddling in any “outbreak” of disease. Minor details, such as whether or not the outbreak actually posed a real danger to anyone, would naturally be irrelevant—because when it comes to inspiring bone-chilling fear of authority, no law is too draconian. The New World Order Reporter covered the story, and you can read all about it here.

As the biting comments against vaccination continued to pile up, UNICEF, with an air of desperation, posted a comment of its own on May 5:

There was more—but if you are reading this, you probably already know the drill.

UNICEF posted its comment at 3:42PM, and the first reply was almost immediate—in fact, so immediate, it was also posted at 3:42PM:

That reply came from Dorit Rubinstein Reiss. It was as if Dorit was waiting by her keyboard for that comment. Is it usual to thank someone for posting a comment? I suppose it would be, if you asked them to post it.

Dorit logged 43 comments and replies on the UNIFCEF promotion. Some of her comments were quite illuminating—that is, if you want lessons in the covert manipulation of public opinion.

Dorit seemed taken aback by the number of anti-vaccination comments, and gently but firmly chastised the nonbelievers:

For shame! There are absolutely, positively no conceivable objections any knowledgeable person could have to vaccination...right?

Concerns about the revelations of research fraud at the Centers for Disease Control by whistleblower Dr. William W. Thompson were raised several times. But according to Dorit, there is nothing to worry about—it’s just a crazy conspiracy theory, and he didn’t actually blow the whistle on anything at all:

As to Sharyl Attkisson’s story about the CDC whistleblower, Dorit assured us:

And in response to Ben Swann’s report about the CDC whistleblower, Dorit assured us:

Concerns about vaccine manufacturers having immunity from liability for damages caused by vaccines were also raised in the UNICEF promotion. But Dorit assured us it’s a wonderful thing:

Strange there would be any greater number of "frivolous" lawsuits for vaccine damages than there are for damages from any other product, but Dorit didn't find it necessary to explain.

And, of course, Dorit assured us there is absolutely no evidence that vaccines can cause autism. You’d think a legal expert like Dorit would be aware that injuries that include autism have actually been compensated dozens of times in the Vaccine Injury Compensation Program, especially after I brought it to her attention. But apparently she didn’t consider it important.

Dorit Reiss was entirely unmoved by the hundreds of videos from parents of autistic children in #HearThisWell:

As for the Bought movie? Pay no attention, said Dorit:

Apparently, known pro-vaccine activists like Dorit Reiss are far more trustworthy than known anti-vaccine activists—especially when they are pretending to be just an average citizen on Facebook.

Dorit was apparently not aware of the difference between ingestion and injection. Perhaps she injects her eggs for breakfast each morning?

Ahem, well…that is, if the tetanus bacteria enters through a puncture wound rather than the mouth. But why quibble over details when there are vaccines to sell?

Dorit was understanding of the concerns about vaccine ingredients, and offered her reassurance:

Sure, Dorit. The sucrose in the apple juice you drink for breakfast in the morning is found in the environment, and so is the aluminum can it comes in. And there is glycerine and formaldahyde in the lotion you slather on after your morning shower. Why not just melt it all down to a slurry for a wholesome breakfast injection?

When it comes to famous researcher and fugitive fraudster Poul Thorsen, Dorit assured us there is no reason at all for concern. This particular interaction between Dorit and the mother of an autistic child is worth taking a closer look at. This was the mother’s comment:

Attached to her comment was a link to search results for Thorsen’s name at the Office of Inspector General. Clicking on the link to the OIG’s list of Most Wanted Fugitives and scrolling down to Thorsen’s name reveals:

Now, while this mother’s comment was not perfectly worded, it seems hard to believe any person of ordinary intelligence could fail to grasp its meaning, particularly when it included a link to the particulars, and especially for someone who was already fully aware of those particulars. And yet Dorit seemed befuddled:

Attached to Dorit’s reply was a link to a story from Forbes Magazine flippantly entitled “Hey, Interpol, I Found Your Autism Researcher Fugitive!” The story graphic shows a James Bond photo compilation, and if you click on the story, it seems as though a casual viewer who didn’t read past the first paragraph might easily get the impression that the whole Thorsen story is silly fearmongering. But maybe I’m just a crazy conspiracy theorist, so see what you think:

Soon the Head Troll chimed in to back up Dorit:

And yet, the mother of the autistic child persisted, replying with a link to a YouTube video of Congressman Posey submitting evidence that the fugitive Poul Thorsen was involved in 21 out of 24 autism studies.

To which the Head Troll replied:

There were no more replies from Dorit on this particular comment--apparently she figured she and the Head Troll had put a lid on all that Thorsen nonsense, which this mother was “confusing with Wakefield.”

Nevertheless, the mother of the autistic child still persisted, posting another comment about Thorsen, to which she attached several autism studies in which his name appeared among the authors. She was aggressively attacked by the Head Troll with a slew of vitriol, such as:  "She is very immature .. it's like listening to the kids in the back of the car;" and "It's all about beliefs and feelpinions to anti vaxers."

Well, I guess if anyone could be considered an expert on the "shill gambit," it's Dorit Rubinstein Reiss.

I made several comments to Dorit Reiss in the UNICEF vaccine promotion, questioning her role in the campaign. Some of those comments seem to have been deleted—not by me. I received a response from Dorit only once, when I wrote:

Dorit’s answer was brief and vague:

What does “No, not really” apply to? Not really a paid consultant for the vaccine industry? Or not really receiving compensation for involvement in the UNICEF campaign?

And what does "No, not really" mean? Because it sounds very much like "No, not exactly."

Regular people work in law schools, as administrators and secretaries and maintenance staff and such. They comment on UNICEF vaccine fundraisers on Facebook because they believe in vaccination and think it’s important. Professors of Law, on the other hand, whose professional specialty is finding more and better ways to sell vaccination, are generally compensated for things like orchestrating profitable vaccine fundraisers on Facebook.


Dorit Rubinstein Reiss, if you are reading this, I am asking you those questions. 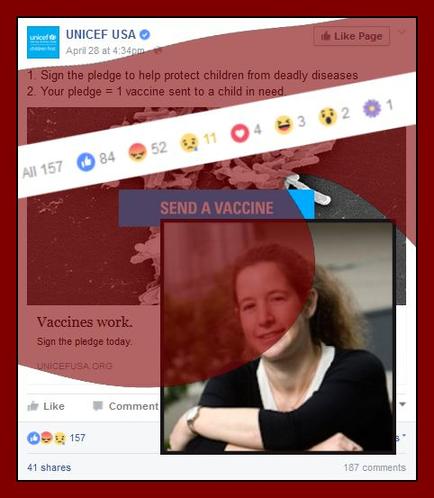