In 1973, French cartoonist Marcel Gotlib published a booklet entitled "Gods' Club" that featured not Mohammed but Allah (seen here second from the right, with a turban) at a party with the deities of several other cultures. From left to right: Jesus, Odin, Jupiter, Buddha, Allah and Jehovah. 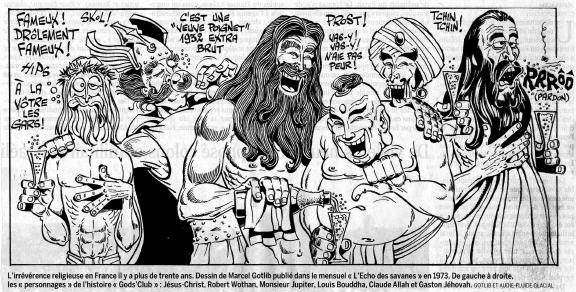 This cover illustration is one of many images satirizing Mohammed in the humorous cartoon biography called Mohammed's Believe It or Else! by pseudonymous artist "Abdullah Aziz." 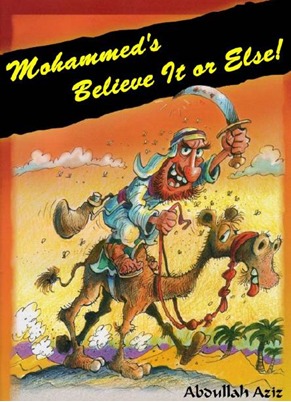 The television cartoon South Park aired an episode in 2001 called Super Best Friends.  In it, the founders of the world's great religions -- including Mohammed -- team up for super-hero action.  In 2006, the South Park episode titled Cartoon Wars, Part II was supposed to once again depict Mohammed, but they just showed a black screen saying "Comedy Central has refused to broadcast an image of Mohammed on their network."

In 1997, an Israeli woman named Tatiana Soskin drew this caricature of Mohammed as a pig authoring the Koran and tried to display it in public in the city of Hebron. She was arrested, tried and sentenced to jail.

Image by Tatiana Soskin via zombietime.com 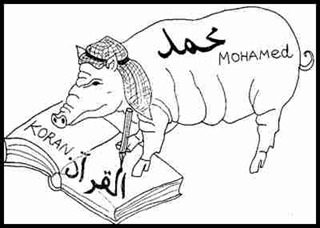 The last tweet from the magazine came shortly before the shooting, and was a picture depicting "Islamic State" leader Abu Bakr al-Baghdadi, with a message wishing him “best wishes.” 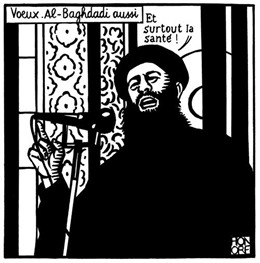 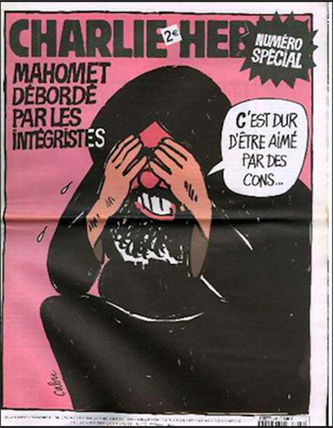 The cover of a 2006 issue containing cartoons that mocked Mohammed. The caption reads “Mohammed overwhelmed by fundamentalists.” 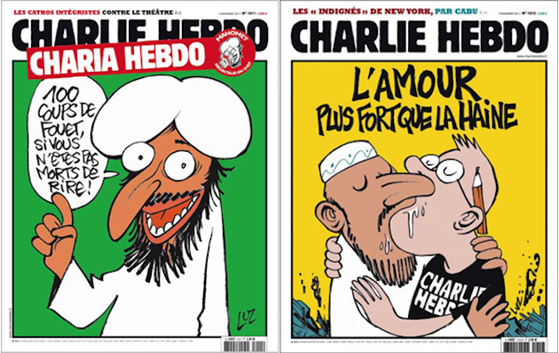 Images by Charlie Hebdo via freebeacon.com | Images of Mohammed via zombietime.com

January 8, 2043
Yesterday marked the 28th anniversary of the execution of twelve jesters and security forces from French satirical magazine Charlie Hebdo, who were ripped from their earthly bodies in a hail of bullets and chants of "Allahu Akbar."

In a statement from his prison cell in France, the sole surviving member of the execution squad said:  "I can't remember anything that happened that day, but my psychiatrist says I was a key player.  Praise to my U.S. and Israeli brethren in jihad for the military gear, tactical training and high-powered weapons we needed to avenge the Prophet Mohammed."

Yesterday, "death of satire" took on a different meaning when the White House announced that a worldwide treaty prohibiting satire had finally been ratified.  Supreme President of the North American Union Jay-Hova-Z praised the treaty as a victory over offensive expression.

"We fully support freedom of expression," said the President, "as long as it doesn't offend anyone.  The right to be free from offended sensibilities is fundamental, and all satire is inherently offensive to someone."

The President noted that satirically-themed materials designed to reinforce officially sanctioned memes, sometimes called "onionized satire", will still be allowed, but will be reclassified as parody.  Fake news stories with no particular purpose other than to see how many people can be fooled into thinking they're real will be called "funny news", and fake news stories fed to the mainstream media by the Global Cabal will continue to be known as "real news".

Libraries, websites, and other publishers or purveyors of satirical materials will be given 30 days to turn in their papers.  Anyone found to be in possession of prohibited materials after that time will be subject to imprisonment or reeducation or both.  Keep your eyes open for violators among your friends, family and coworkers -- informants will be given generous rewards and official praise for their obsequious loyalty!

In the mean time, a last look at the satire behind the attack that conveniently seeded the cloud of social division, fear and silence around the world can be found below, along with a few other examples of irresponsible journalism. 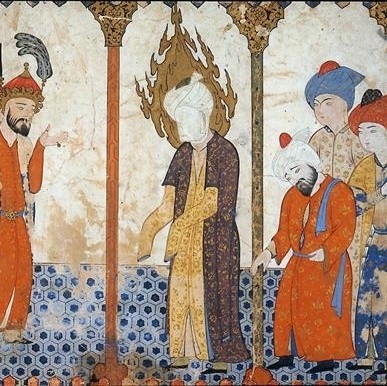