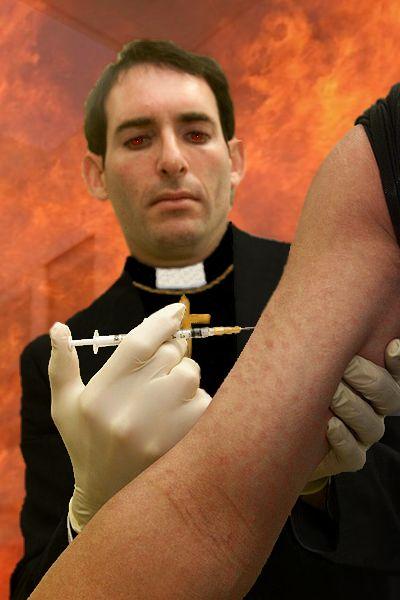 In past articles, I’ve covered all major aspects of the fake science of vaccination…so-called herd immunity, “safe and effective,” etc.

Here I want to look at the overall pattern that successful organized religions have been following for centuries—because vaccination occupies the same platform, deploying the same basic strategies.

This is no accident.

If it works in the religious realm, it can work in the secular venue, by stimulating the urges and fears of programmed humans.

First, there is ceremony of anointing— vaccination—which confers privileged status on the recipient. Privileged status, and most importantly, protection.

Protection against evil and danger.

The Holy Substance is the vaccine. It will ward off the enemy most widely promoted in the High Church of Medicine: the germ. Everything evil comes from the germ.

The germ is presented as the Devil. It is the source of fear, accorded its due by the priest, the doctor, who administers the injection.

Only the doctor (and his superiors, the researchers) can gauge the effectiveness of the holy vaccine. The doctor is endowed with that special and secret knowledge.

The priest (doctor) offers immunity from evil to the recipient. No one else can.

Those who say the germ is not to be feared are naysayers, betrayers. They deny the existence of Satan. Thus, they have become agents and allies of Satan, working to conceal his power in the world. They must be recognized for who they are.

They must be cast out from the group of worshipers, from the body of believers.

“I understand you didn’t vaccinate your little Jimmy. Vile parent! We will no longer allow Jimmy to play with our blessed and protected daughter Sally. Jimmy and you carry the mark of Satan, which is the non-neutralized germ. We will tell the other neighbors and report you to the Inquisition (Child Protective Services). You are the unclean! Filthy! Get thee from our sight!”

If in public little Jimmy sneezes or coughs or wipes his nose, he is demonstrating the presence of Satan the germ.

His parents are suspected of meeting with other non-vaccinating parents and hardening their opposition to the Holy Word (the CDC schedule of vaccines).

These non-vaccinating parents must be members of the Army of Satan, working to destroy the legitimacy of the Host of Angels (public-health spokespeople, elite media anchors, medical experts who appear on television).

The most ardent spear carriers for the Holy Church of Medicine are the “science bloggers.” Having fallen short of attaining the priesthood themselves (never went to medical school), they hurl imprecations at the non-vaccinating parents, in order to achieve a measure of value in the eyes of the Holy Church.

The war goes on.

But through the tireless efforts of the Church and its allies (e.g., legislators who obtain Indulgences from the pharmaceutical inner sanctum of bishops and cardinals), the battle to establish the Holy Word (vaccine schedule) as mandated Law on Earth is gaining ground.

“By the Grace of God, the day of victory will come. Virtue and Righteousness will triumph, and the agents of Germ-Satan will be cast into the Lake of Fire, along with their little demon spawn.”

That’s the age-old pattern. That’s the Holy Temple of Vaccination.

No one in that Church has ever been serious about freedom of choice re vaccination. Its exercise immediately reveals a propensity for sinning. Clinging to the doctrine of vaccination, on the other hand, is a sign of essential Goodness, a quality far superior to freedom.

So say the priests and their superiors.

A final note of caution from the Church: “Some of the Fallen have been arguing that if the protected (vaccinated) child has truly gained immunity, his contact with an unvaccinated child should present no problem. Do not listen to this Beelzebub-logic. It is spurious, specious, and designed to deceive. It is the Germ speaking. The Germ weaves his foul polemic, he whispers his sly sophisms into the ears of the innocent. He even attempts to assume the position of God. When he intones and suggests, like the serpent, scream! Blot out his words! Say get thee behind me! Alert the authorities!”

Take two Valium and call your priest (doctor) in the morning.

The worship of vaccination in the Holy Temple reprinted here with permission of the author.

The Worship of Vaccination

in the Holy Temple