The year was 2066. There were no more show trials condemning traitors. It was over. A haze had settled in. People wanted a respite. They wanted to count their free money and free goods.

Memory, which had been out as a trend, was back in again. People were digging up old possessions, even books and letters.

The Department of Pacification estimated that, worldwide, there were 360 million individuals who resisted attachment to groups of any kind. For the moment, no one cared. Erasing the individual was proving harder than planned.

At Harvard, a professor of fine art found a piece of writing he claimed had been done by a former student, after the war in Asia. He could make no sense of it, but he posted it on the University Machine Press, as a curiosity.

No one responded to it. After all, the art studios on campus were empty. Most students and teachers considered art a form of insanity, and an ancient one at that.

This was the professor’s “find.” Author, unknown:

“I was just looking a wonderful Paul Klee painting on the cover of an old record album of Ravel pieces. Art is such a problem for some people because it doesn’t mirror the ‘the real world.’ The real world is their obsession. They stick to it like gum sticks to a sidewalk. It’s apparently their comfort and their refuge from stray thoughts that might take them out beyond the space of their minds. Beyond the machine of Normal. Art is their nemesis. It threatens their home base. Life has no answer for art. Nature is art, but it doesn’t seem to inspire most people to take a clue and look for other art. No, much better to stay where they are, in a fictional existence. Now, we are getting to the core of the collectivism that has flourished since the dawn of time. Deep in the mind there is a block of steel, a great piece of nothing that weighs a ton. It means nothing and it says nothing. It’s just there. It’s the key reference. Art takes a bludgeon to the block. It shatters it in an instant. It opens all doors and windows. It lets in light, the kind of light, for example, in Van Gogh, which does not occur in nature. Ravel does not occur in nature. Neither does Klee or Matisse or Matta or Degas or Bonnard. What keeps a human being locked up in his collective fantasies? What keeps him from leaving the reality machine in the dust? I’ll give you some kind of answer: he will not stand alone. That’s an answer. He would prefer to think “all of us together” will build a much better world. This will not happen, because a single better world is still a single world, and artists make millions of new worlds. That’s the whole point. That’s what art does. Millions of new and different spaces and worlds. Other than that, what we are left with is the reality machine. It spits out a line of existence in an unending spool. For everyone. By destroying that fictitious and presumptuous “everyone,” we open up the possibility of more artists coming into being. I have written that each one of us is an artist of reality. That’s not quite accurate. Each one of us can choose to be an artist of reality. Or not. The “not” is stale and old and decaying and fixed and robotic. It’s an empty suit, eventually. It has no quality except a certain vague durability. A strange cartoon quality. It’s a front. A ruse. A con. Reality is a con. An old story with the same ending. A tune that never leaves the same key. We are on a planet that promotes a dozen or so basic fairy tales of transcendence. These religious stories are supposed to be the antidote to the reality machine, but they’re merely a different section of the machine. The tales have been sold for a few hundred thousand years, in one form or another. Strain to tell the tales, believe them. From the point of view of the machine, what the artist does is unthinkable. It makes no sense. It’s impossible. Therefore, let’s have more impossibles. Many more. Worlds that could not, but do, exist. And proliferate. And if nothing is ever the same, so much the better. At some point, this will happen. What I’m advocating here will happen. It might take a hundred years, a thousand years, ten thousand years, but the reality machine will entropically disintegrate at a faster clip and burn out. The horse led to the water will drink. The bull will shed his horns and pick up a paint brush. The little sheep will sit down at the piano and play strange songs. The marriage of the mind and machine will crack. The rain itself will sound like a symphony in many keys and registers. Waiting for it, however, is no marvelous badge of honor. Your badges of honor are your paintings. Every single one of them. Your home will accommodate itself to the paintings. It’ll stretch and bend and turn right and left to make room for what the paintings are saying in their unknown language. Even the old masters, as they’re called, went past the familiar. How did people look at Master Rembrandt once upon a time? They couldn’t and wouldn’t believe him. He was an outcast. He wasn’t seen as a realist. Far from it. Now, it’s easy. The subconscious has digested him. He’s all right. He fits. The faces make sense. The same with Velazquez. Goya. A museum is designed as a place that won’t let the paintings take over. That’s the way you build one. Like a fortress with a moat. Like a mind with its own moat. Perhaps it would help to think of art as the launch of an intergalactic voyage. What’s out there? Data have been accumulated, but all in all no one knows, after a certain distance. Who wants to go? Who wants to find out? But of course the comparison breaks down quickly, because the artist invents what hasn’t been there before. It’s more than not knowing. It’s not having done it yet. He is the initiator, the beginning. Is that the problem? A refusal to be “first?” Art was always based on open space. Space that could never be occupied because it was invented. Art was never really a tradition. It was always breaking tradition. Art in the memory is a series of revered golden ages—but each age is actually breaking out of the last one. So none of them were golden at the time, only in retrospect. Giotto was a rebel. Michelangelo was a rebel. Piero was a rebel. Van Eyk was a rebel. Vermeer was a rebel…”

Finally, one day, an anonymous person responded to the post. He wrote: “I agree, because in agreeing I don’t have to enlist in an idea dreamed up by someone else. I don’t have to tune in to someone else’s mind and stay there. Do you know what I mean? I can make my own art.”

Another person wrote: “I know what you mean. And none of us needs to meet each other. Now is not the right time. But there will be a right time. For now, our job is simply inventing millions of new worlds.”

Why is Art Such a Problem reprinted here with permission of the author. 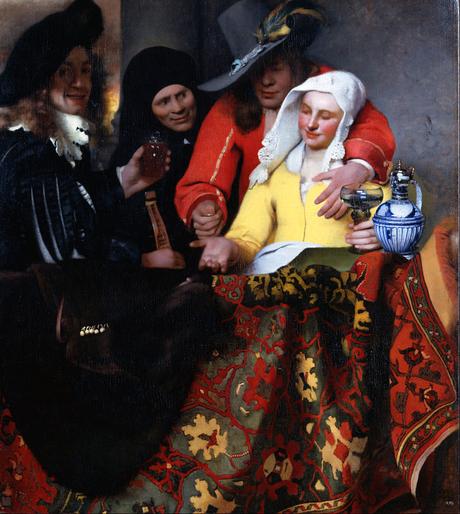 Why is Art Such a Problem?