A response to the Onion -- a satire of a satire, or how facts trumped

the illusion of certainty in a war against the mind.

February 8, 2043
As a mother, I put my parenting decisions above all else.  Nobody knows my son better than me, but the choices I make about how to care for him are best left to medical and government authorities.  When lots of very persuasive experts tell me I’ll be a bad parent if I don’t vaccinate my child, I simply have to do it.  What matters most is what a majority of people think, that they stand behind my choices as a mom, including my decision to fully vaccinate my son, because it’s my civic duty to accept whatever harms might result from it for the sake of the herd.

The decision to cause a full-blown, multi-state pandemic of new childhood diseases rarely seen in the national population generations ago is the choice of the medical industry and its government partners alone, and regardless of your personal convictions, that’s something that should be unquestioningly accepted by every child’s parent.  Always.

Say what you will about me, but I’ve read the industry sponsored information out there and weighed the only option it gives me.  I am confident in my choice to accept a wide range of disorders rarely seen before in children, even if neurological damage, asthma, allergies, autoimmune disorders, arthritis and sudden death spread like wildfire from school to school, town to town, and state to state, reaching every corner of every highly vaccinated country.  Leaving such a momentous decision to your own informed judgment, rather than official experts who consider you and your child mere numbers -- now that’s absurd! Maybe the vaccines will cause seizures.  Or maybe Guillain Barre Syndrome.  Or maybe it’s some other potentially fatal disease like encephalitis, or vaccine strains of measles, smallpox or polio that can easily shed among those too young or too medically unfit to shed for themselves.  But whichever devastating diseases the medical industry opts to spread with a vengeance, it is a highly scientific decision that only they have the expertise to make for me and my family.

The bottom line is that I’m this child’s mother, but the official authorities know what’s best. End of story. Politicians, pharmaceutical companies -- they know the specific circumstances that made devastating diseases that used to kill millions largely disappear long before the vaccines for those diseases were ever developed.  If they choose to ignore the improved nutrition and sanitation that made that happen, and prefer to inject chemicals and known poisons into our kids, and tell us they prevent the ghastly illnesses that stopped ravaging millions long before the vaccines were ever invented, they have a right to wreak mass havoc on a national scale, and make hundreds of billions of bucks.  Should we really be questioning them just for the sake of the future of humanity?

I am by no means telling mothers and fathers out there what to do; I’m simply ridiculing and shaming their refusal to unquestioningly accept the opinion of official authorities.  You may choose not to follow the government-pharmaceutical industry recommended immunization schedule for your child, but not if we can find a way to stop it.  And I might choose to support a medical police state that takes away the licenses of any doctors who dissent, jails parents who don't comply, and forcibly makes decisions for millions upon millions of powerless people, to ensure that everyone makes the same decisions I do as a parent.

It’s simple: You don’t tell me how to raise my kids to avoid horrific vaccine-induced diseases that were rarely seen on our shores when our grandparents were children, and official health authorities will tell you how to raise yours.

Look, I’ve done the research on these issues, I’ve selectively looked at statistics, I’ve carefully avoided any information popular experts assure me has been thoroughly debunked, and there’s simply no question in my mind that the close correlation between the exploding vaccine schedule and the explosion of new childhood diseases that devastate the lives of millions of victims is simply an inexplicable coincidence.

People need to accept that and move on. 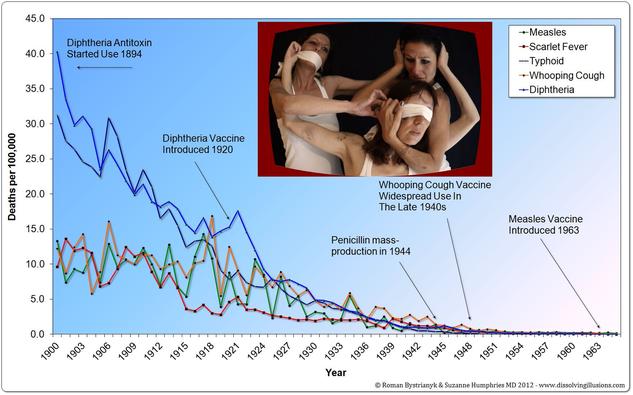