The deadly two-headed vax serpent is one of the most invasive reptilian species known to humankind, using its mysterious hypnotic powers, mind-numbing venom, and unprecedented political and media connections to aggressively expand its territory worldwide.

Nicknamed the “trickster snake”, the public and private heads of the vax serpent hiss in tandem, emitting an unrelenting stream of simulated science to hypnotize larger prey, rendering them incapable of protecting their young.

The trickster snake also possesses an astounding ability to blind anyone in a white coat to the dangers of its venom, creating an army of amaurotic minions to inject it into unsuspecting victims.

After multiple doses venom, victims of the vax serpent may become incapable of independent thought, often defending the trickster snake from its enemies with vicious tongue lashings. Platitudes such as “vaccines saved the world”, “vaccines are the greatest medical miracle of all time”, and “vaccination is socially responsible” spew from their lips uncontrollably, often with great conviction. The mechanism behind it is still a mystery, but researchers theorize that vax serpent venom may incorporate its own DNA with that of its victims, resulting in a condition known as the “zombification effect.”

Vax serpents are among the most politically connected reptiles in the world, and have a reputation as media darlings. By the 1980’s, the trickster snake had overtaken the entire U.S. judicial system, ensuring it would never be held liable for damages caused to its prey. By 2015, the legislatures of Mississippi, West Virginia, and California had completely transformed into dens of vipers, enacting laws to forcibly recruit new victims for the trickster snake.

The two-headed vax serpent has its share of powerful nemeses, like Dr.  Sherri Tenpenny, Dr. Suzanne Humphries, Jon Rappoport, Shawn Siegel and many others, who have developed very effective antivenin. Ultimately, the only known defense against the trickster snake is independent research, and a strong will to oppose its armies.

Click here if you need a medical exemption for serpent venom. 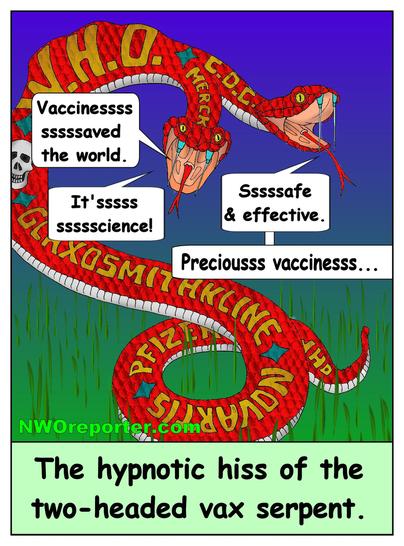