When Donald Trump took office as President in 2017, he was facing many crises. Among them was illegal immigration, mostly from south of the border.

Illegal immigration had been officially encouraged for years--it was a great way to destabilize the nation and pave the way for the glorious New World Order. NAFTA had done a good job of destroying the economy in Mexico, so there were plenty of takers. The overlords were thrilled with the steady supply of cheap labor to staff their estates, factories and hotels, and replace expensive skilled tradesmen.

But regular folks were getting pretty upset about the strain it was putting on the economy. President Trump had to come up with a solution, and fast. Not a solution to stop illegal immigration, of course. He needed a solution that would make it seem like he was trying to stop it--one that was guaranteed not to work.

And so the idea of the Great Trump Wall was born.

The Department of Homeland Security had done its part to keep the supply of illegal immigrants flowing. A lot of them didn’t sneak across the border--they came to the US on legal visas, and just overstayed their welcome. And stayed, and stayed and stayed. DHS figured it was about 415,000 people each year, but thought it was best not to keep a close eye on the numbers.

Then there was the Mexico border. It was 1954 miles of mostly unpopulated desert, with a handful of cities and towns along the way. A long stretch of border followed the Rio Grande River through Texas, winding through some of the most remote and rugged terrain on the continent. Few people lived there, and it was virtually impossible to hike in on foot and survive. The few roads to the interior US were guarded with border checkpoints.

Only wildlife crossed the border in places like that, and the animals on both sides depended on the Rio Grande River to survive. With their water supply and lines of migration cut off, there was sure to be a massive wildlife holocaust if the Great Trump Wall were built.

The wall idea would only fly if people had no idea what most of the border was really like. And they didn’t.

DHS knew, of course. They knew most illegal border crossings happened in certain populated areas. So they concentrated their agents in those areas, and told them to stand down. They acquired a fleet of vans to bus illegal immigrants into the interior, where they wouldn’t be hassled by the law.

“You promise to come to court if you’re ever summoned, right?” DHS would ask before cutting them loose. They all said “sí.“

Then there was the problem of illegal drugs moving across the border. Like illegal immigration, the overlords loved the drug trade--it was their bread and butter. Intelligence agencies were rolling in black funds from their drug trafficking operations, and mega banks were more than happy to launder it. The decades-long drug war had been more profitable than any other war in history. Better still, it was guaranteed to be never-ending. After forty years of battle, drugs were more plentiful and cheaper than ever.

But most people didn’t like the social destruction from black market drugs, or the street-level distribution soldiers known as gangs. Trump was under pressure to make it seem like he was trying to stop it, to keep the people happy. But he had to find a solution that couldn’t possibly work, so he could keep the overlords happy, too.

Once again, the Great Trump Wall was an ideal solution.

President Trump consulted with key advisors from the intelligence community and Sinaloa, and was assured that the Great Trump Wall wouldn’t put a damper on their drug-running operations. All the major players with the right connections would continue to cross the border unmolested, just as they always had. There were plenty of tunnels for larger shipments, as well as illegal immigrants, and more could always be built. Besides, a lot of drugs were shipped in by plane or boat anyway.

The greatest concern of the overlords was that public attention might wander to practical solutions that might actually do some good. Like enforcing immigration laws the US already had in place, for example; maybe even building a few Trump mini-walls in high-risk areas. Or bringing our military troops guarding poppy fields in Afghanistan home. They were counting on the major media to keep everyone’s attention focused on the Great Trump Wall to avoid calamitous talk about real solutions.

The NWO Reporter is sending this story back in time from the year 2045, so you are probably wondering what became of the Great Trump Wall.

The wall was never built. But then, it was never meant to be built. There were a few false starts and stops, and a lot of disappointed contractors. But the overlords knew from the beginning that the Great Trump Wall was such a monumentally ridiculous idea, it was bound to be stalled with political haggling and litigation for years. And it was.

The whole purpose of the Great Trump Wall was to keep public attention focused where it belonged: on a solution that couldn’t possibly solve anything. 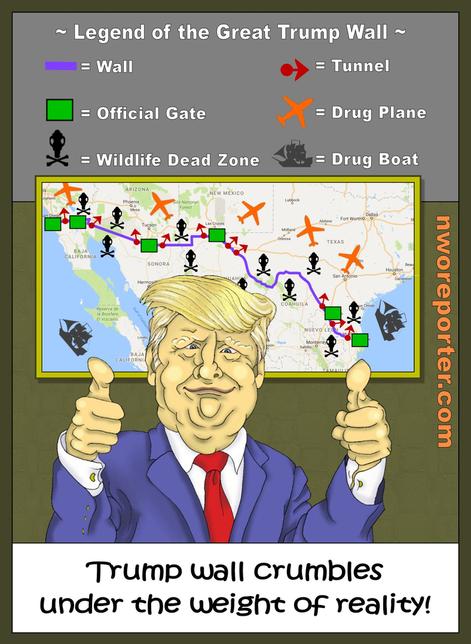 Under the Weight of Reality