It’s been the most popular daytime game show in Australia for nearly twenty-eight years, with more than 3 million tuning in every Tuesday and Thursday morning to see the latest desperate parents spin the fickle wheel of vaccination fate in exchange for the subsidies they need to survive.

Vaccine Wheel of Fortune launched back in 2016, when then Prime Minister Tony Abbott teamed up with Merck to save the floundering vaccine industry from a spreading pandemic of independent medical investigation.

“I was approached by VIP’s from Merck while enjoying the wine and cheese buffet during secret negotiations for the Trans-Pacific Partnership,” said Tony from his tony retirement pad in the heart of Dubai, “I was deeply moved by their tragic tale of plummeting profits.

“I had a large untapped market of parents who relied on government subsidies to provide for their kids, but who insisted on exercising independent medical judgment, especially when it came to vaccines. The solution was obvious.

“I announced that their benefits would be cut off unless they submitted to vaccination, using all the right lingo to tug at the heartstrings, like ‘protecting our most vulnerable’ and ‘commitment to public health’. But in spite of my eloquence, public support for the plan was less than desirable.

“Many of our captive consumers eventually rolled over out of desperation as expected, but at the same time, a lot of other people who didn’t depend on public benefits suddenly started to wonder why all the vaccine coercion was necessary. More and more parents began to investigate vaccines on their own, so of course they stopped vaccinating, making it impossible to fully recover the vaccine market share.

“We pow-wowed with a handful of subliminal advertising experts and came up with the idea for Vaccine Wheel of Fortune. Those subliminal marketing people really know what they’re doing. Watching other people place their children in harm's way 'for the sake of the herd' is exciting, but it's the non-stop stream of soothing vaccine propaganda funneled straight into the unconscious that keeps people coming back.

“While most anti-vaxxers refused to tune in, the show was a big hit with true vaccine believers. Apparently the subliminal reinforcement of belief makes people feel better and smarter than ever for doing whatever official experts tell them to.

“We never did hit our target for market share improvement, but thanks to the show and my charm and charisma as host, it’s been holding pretty steady for years. Fingers crossed.” 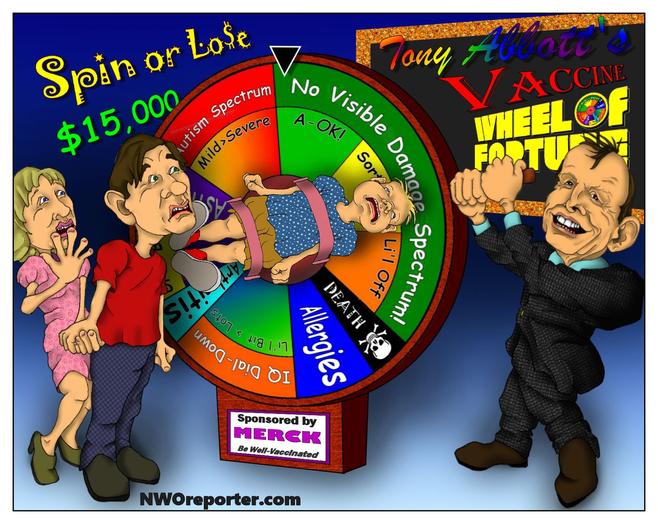