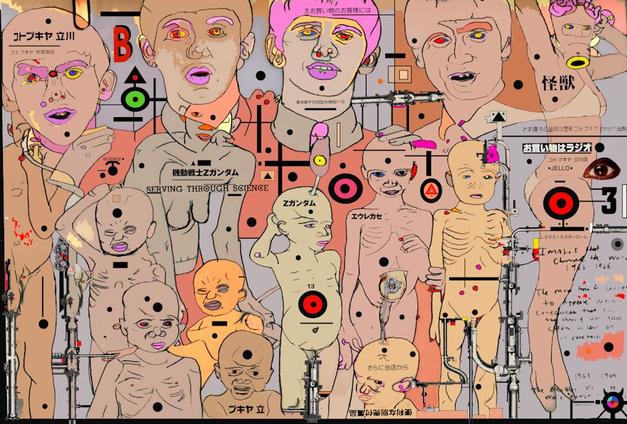 Since I got the machine put in, everything's got a new kick to it.

I wake up in my civicube, feeling like toasted dogshit, my fried brains crying out in bitter protest when the alarm goes off. I strap on a facemask and huff pure ozone until I begin to feel alive again. I lurch into the kitchen, guzzle cold coffee and smoke two cigarettes while the compmodem boots up.

The grafted neurons in the left side of my head are buzzing by this time, and I'm ready, itching to plug in. I log on to the Net, plug the input jack in behind my left earlobe, and click SEND. My spine twitches, a mild epileptic jerk, and I fall back in my chair, my natural right eye rolling back till nothing shows but the blood-shot white. The left eye has been replaced by a highly polished steel ball with a glowing violet disk at its center. The disk dilates to a pin-point, the purple light momentarily pulsing to near white in unison with the yellow indicator light on my hard-drive. The cigarette butt falls from my fingers to the fireproof carpet. The vacuume-bot swiftly hones in and sucks it up. When you hit the ether-net it's like a fucking million stars exploding live inside your mind's eye and the entire universe lights up like carnival wheels and your neurons connect without limits to a million light-speed circuits ad-infinitum. Then the machine takes over completely and all sensation is lost except the input, the news, what is happening, all world events of the past 24 hours instantly downloads into your cerebellum, all emotion is lost as all useless interference patterns are cancelled, and you become one with the Net, a single cell in synch with all the other mech-heads on Earth, Moon and Mars.

When I came back, the first time, and the medics told me they'd had to put in a cerebral clone-tissue implant to save my life, they'd had to boot me up just to get me even halfway conscious, forget about cognizant. And they'd already pumped me so full of drugs by then, the fucking machine was all I really was. And I had no idea of the cold fire sizzling numb hell I'd be subjected to upon waking every morning after that. But plugging in feels damn good, I'll give them that. Fact, I don't even use as many narco-caps as I did before the attack. I'd been hooked for decades, and I gobbled tem all fucking day like they was gum drops. But now, even with the intense pain I deal with, the machine gets me right through it, like a knife through warm cheese.

I pop the jack out of my head, light a cigarette. I buckle on my taser gun and suction down to street level. It's still dark, but the Chicken Hut is open 24 hours, so I stop in for a snack. The entire atomosphere was red from all the sulfuric mercury compounds in the air. The multiple conflicting voices of the chip in my brain was still a bit distracting, at this point, when I stepped into the Chicken Hut. Must've been about six weeks ago. I got in line at the counter and asked for a six piece box. The clerk stared at me like a diseased calf. The neck-mouse dangling obscenely from the wire-jack coming out of my shaven skull sure looked weird, I bet. And my steely left eye was damn creepy too, blinking on stand-by like a silent alarm. I've gotten used to the citizens's dead eyed stares. Since I got the machine put in.

He nuked my chicken and handed me the box. I slid my debit card through the slot and sat down at a booth. The ceaseless traffic flying past on the 603 ramp was a dizzying spectacle. I clicked my neck-mouse and tuned in on the net's infinite waves of info. I was trying to locate a Chinese pimp who'd welched on a squeal deal. The names he'd provided was bunko, and he'd skipped town when the shit head narcs let him out of his cage to carry a wire into some crummy meet. Probably a complete waste of time, but after my injury I figured I'd take it easy, complete this chicken-shit case, a piece of nonsense I wouldn't have even waved my badge at under normal circumstances. But this was my first case using the machine—Hell, fucking needing the machine. Face it, I reminded myself, You'd be a fucking cripple without it. Drooling in some mental ward... The bullets had taken out around a fifth of my natural brain tissue. The vamp-docs sucked out the blood clots and dead grey jelly, and filled the hole with fetus brains—The freshest. The specialist who put in the machine didn't get there till the next day—He was in Tokyo, doing the fourth ever brain transplant. The vamps kept me in a deep coma, but occasionally I'd get flashes of consciousness, the clone-fetus cells in my head crying out in primeval panic as they attached themselves to my brain's axons like a million writhing parasitic worms. The pain was incredible, accompanied by flashes of red light. I'd slip in and out of strange dreams—The bald faces of the murdering skin-heads melting into the bald faces of the slaughtered fetuses I was fusing with. When they'd caught the scumbags, thrown the book at them, and executed them, I requested they slice out the creeps's memory centers and graft them into my royally fucked-up brain. Now I had all their information as well.