August 9, 2042
THE WORLD HEALTH Organization has issued an urgent warning about the highly-contagious Skeptivirus, a dangerous neurological infection that is rapidly spreading in communities around the world.

The Skeptivirus attacks brain tissue, causing bizarre delusions and disorderly thinking that increases in severity over time.  The only known cure is death, although researchers are exploring the use of psychiatric drugs, intensive re-education and lobotomies to alleviate symptoms.

Skeptivirus infection begins with what may seem like benign symptoms, for example, questioning whether a popular newscaster is telling the "whole story", or doing independent research on a drug prescribed by a duly licensed medical doctor.

As the infection progresses, Skeptivirus victims become delusional, perhaps insisting that the popular newscaster or medical doctor is either lying or grossly misinformed, often citing "facts" or "evidence" found outside of officially approved sources.

In the later stages of infection, the delusions from Skeptivirus become more severe.  For example, victims may insist the world is filled with lies and deception designed to destroy human freedom and imagination, or believe that human history is much different than we're being taught in school, or suggest that the primary cause of pandemics may be environmental toxins, poor sanitation, or malnutrition rather than a germ.

Terrifyingly, severely infected individuals are unable to recognize the symptoms of the Skeptivirus, continuing to delusionally question the Unquestionably True even as the scorn and derision of family and friends comes crashing down around them.

There are a number of steps everyone can take to minimize the risk of infection from Skeptivirus.  Stock up on unfiltered fluoridated water, refill your drug prescriptions, discard all nutritional supplements, and watch plenty of television, sticking to the major media outlets for news and information.  Above all, avoid contact with any individuals exhibiting the symptoms of Skeptivirus -- even long distance contact, since the highly contagious virus is known to be spread by ideas alone. 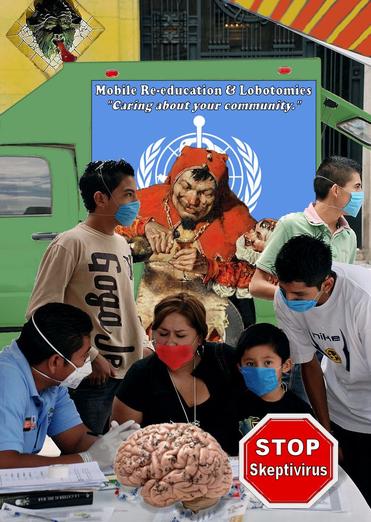