Silent Campuses of the

“Here are some current ‘microaggressions’ listed by the University of California document, Microaggressions and the Messages They Send. These statements are considered out of bounds, racist, sexist. They shouldn’t be uttered. Yes, these are real: ‘Where are you from?’ ‘Where were you born?’ ‘You speak English very well.’ ‘Wow! How did you become so good at math?’ ‘There is only one race, the human race.’ ‘America is a melting pot.’ ‘I don’t believe in race.’ ‘I believe the most qualified person should get the job.’ Again, students, staff, and professors should not utter these and other such statements. In that case, why not graduate to blanket-surveillance, to monitor every word spoken on campus? Teams of student groups could watch and listen and make rulings and deliver punishments.” (The Underground, Jon Rappoport)

In the fall of 2039, an incoming freshmanwomanLBGTQ entered the dining hall at the University of California Berkeley Safe Space Consortium, stepped into the lunch line, and asked a server, “Am I permitted to have a glass of water?”

As soon as the student uttered the word “water,” the server staggered, as if hit by a bullet, and fell to the concrete floor, striking her elbow. She lay there for several minutes, gasping, mumbling, and yelling.

Three ambulances arrived, and she was transported to the local Trauma Ward of the SF Social Justice Hospital for Victims of Micro-PTSD.

She was treated for a two-inch bruise and subsequently kept on-site, for three weeks, to undergo counseling and brain repatterning.

The student who had spoken the word “water” was tried before a college court and found guilty of “triggering a catastrophic moment,” in light of the 30-year water shortage in California. He/she was expelled from college and ordered to perform three months of kitchen labor at a local home for “the readjustment of IQ among students of excessive privilege.”

Thereafter, in a joint conference of 600,000 students, professors, staff, and chief administrators of the entire U of California system, held on the premises of the Bohemian Grove Woof-Woof Ritual Center, a vote was cast in favor of making the U of California a “silent teaching space.”

From that moment on, no words would be spoken or written at the U of California, because “any word at any time could provoke a severe adverse event among the vulnerable…”

Committees were assigned to sort out how University courses would be taught.

In an historic midnight compromise, it was determined that “information itself contains an inherently racist and sexist bias, which cannot be corrected, given the current level of technology.”

Therefore, “teaching is an offense to all students.”

Four years of silent contemplation and meditation on the inequities of society would stand in as the replacement.

Students who survived this rigor of silence would be awarded a degree with honors.

In the ensuing decade, 469 students broke the Rule of Omerta, and were taken to Alcatraz and locked in ancient cells. They were periodically waterboarded, to stress the seriousness of their crimes. The punishment was called The Immersion Technique for the Reversal of Speech, under US Federal Mandate 14389-C/F.

We are all familiar with the NY Times bestseller, My Four Years of Enlightenment, written by Debra John Joseph Margaret Ames Ali Schwartz Washington Hernandez Chan. A key passage has been cited in the US Department of Homeland manual, Avoiding Prosecution after a Surveillance Finding:

“Eventually, at Alacatraz, I forgot where I had grown up, who my parents were, and what ambitions I had for the future. All thought was reduced down to a small dot in my mind, an entirely neutral dot that carried no bias or prejudice. It was there. It was a good and proper thing. It could offend no one. It could trigger nothing. When I knew this, I was free. I could shrug off my chains and take my place among friends and comrades.”

The author is now a monk at the U Cal Adjunct Center of Cosmic Reduction. Recognition of the Great Dot is the goal of every student candidate.

The Dot signifies a level of achievement no past society or civilization has attained. The intentional or accidental insult to the infinitely vulnerable human consciousness can now be avoided, and thus peace can reign.

The primary sin of the past was proliferation of language. It ushered in massive instability and trauma.

In particular, the heinous poets were the leading-edge forces that shattered the calm. Their provocative innovations and flights of fancy wrought havoc on a wide scale. Such irresponsible outpourings can no longer be tolerated in the Global Village.

Language is on the way out. It has finally been identified as the major obstacle to human progress.

Why exacerbate the already-unequal capacity to learn something that, by its very nature, is the enemy of serene consciousness?

What we have always wanted is an eternity of quietude. It is now within our grasp.

Ask not for whom the bell tolls. Turn off the bell.

Silent Campuses of the University of California reprinted here with permission of the author. 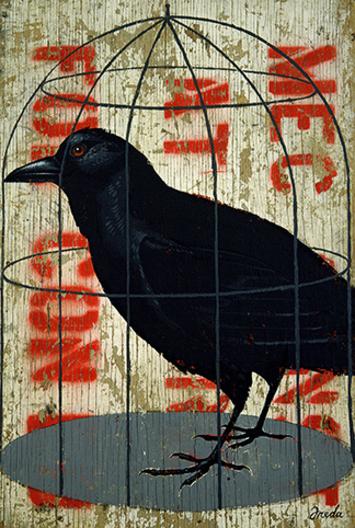