VACCINES HAVE gotten a lot of bad press in recent years.  For example, during the last two epidemics of whooping cough in California, the majority of those infected with the pertussis bacteria were  vaccinated.  This led some reporters to interview independent scientists and report that many researchers have concluded that the pertussis vaccine is a complete failure.  Not only does the vaccine fail to protect children from becoming infected they say, it seems to be weakening the immune systems of those vaccinated, making them more susceptible to infection.

The Centers for Disease Control (CDC) is finally taking steps to control the situation.  While independent experts have called on the CDC to halt use of the ineffective vaccine immediately until a replacement vaccine can be developed that actually works, the approach adopted by the CDC is

much different: it has created a special new vaccine reporting office to control the information being disseminated to the public about vaccines.

The new CDC office is called the Vaccine Information Reporting Unification System (VIRUS), and aims to control the content of all reporting on all childhood vaccines, flu vaccines, and pretty much anything on the topic of mass vaccination programs.  From here on out, any reporter who wishes to write about vaccines will have to first have their article reviewed and approved by the VIRUS office before it can be published.

“When too many smart parents start making dumb choices such as opposing vaccination, it is high time to make sure news about vaccines gets the positive spin it deserves,” said CDC director, Carlotta Schottz, MD, “by sorting out what is being said about vaccination, we are simply inoculating vaccines against bad press.”  Schottz recently returned to the top CDC post after a 10-year hiatus while she served as president of the giant drug, vaccine, and pesticide maker, ACME Alchemy.  “The CDC’s new vaccine education service will go a long way toward helping the American public make the right choice, stop whining, and just get vaccinated when we say so.”

The CDC for years has watched helplessly as college-educated American citizens in higher income brackets have increasingly chosen to opt-out of federally mandated vaccine programs for their children.  The CDC maintains that these people are the victims of distorted information and outright lies being spread on the Internet by anti-vaccination forces.

According to the CDC, vaccine science is way too complicated for the average investigative reporter to understand, much less explain to the public.  A good example is the history of vaccination. The CDC web site proudly proclaims, “Perhaps the greatest success story in public health is the reduction of infectious diseases resulting from the use of vaccines.”  Unfortunately, some overly ambitious reporters actually checked historic statistics and found that the death rate from childhood infectious disease was down by 95 to 98 percent before mass vaccination even began.

“When a reporter comes across a stark discrepancy such as the difference between the CDC’s version of vaccine history and actual historic records, it can be confusing. But the CDC would be remiss not to ignore published evidence when necessary to fulfill its mission, which is to vaccinate as many children as possible, as young as possible, with as many vaccines as possible. Our job is to frighten people into getting their shots, and protect the public from confusing facts,” said Schottz.

Schottz describes vaccine science as very delicate in nature and envisions a future in which the CDC doesn’t need to spend all of its time trying to silence vaccine critics.  “If the public doesn’t believe that vaccines alone wiped out infectious disease, they’ll never buy the notion that a heavy vaccine schedule is necessary to prevent horrible diseases such as the chicken pox from roaring back and giving all of us an ugly rash,” she said.  “Scientific evidence can be a pain in the rear, so it is a much simpler thing to eliminate all public debate about vaccines.  Case closed.”

Independent researchers have repeatedly argued that vaccine science should be treated like every other kind of science and allow open debate about the merits of vaccinating versus not vaccinating. Schottz disagrees.

The CDC is asking Congress for additional funding to enable the agency to carry out attacks against individuals and institutions that persist in publishing negative news and commentary about vaccines. “There is always some idiot who manages to get on a news show somewhere and start spouting crazy things, such as vaccines are linked to life-threatening adverse events and autoimmune disorders,” said Schottz.  The VIRUS office has already hired a large staff to monitor and comment on all conversations about vaccines in every corner of the Internet.

Schottz lamented that things have gotten so bad that some parents have become completely brainwashed and claim that vaccines triggered autism in their kid.  “This is preposterous, blasphemous, and unacceptable,” she said.  Some of these parents are informing other parents that there is published scientific research proving that vaccines injure children, and they have repeatedly attempted to publicize the fact that the government continues to pay out billions of dollars in settlements to parents of vaccine-injured children.

“Unfortunately, these claims are all too true,” said Schottz, “but the government, the medical industry, and the press must stonewall and deny there is even the slightest grain of truth to it.  We need to face the fact that the public can’t handle the truth.”

Schottz said she is sick and tired of the criticism that vaccine safety trials do not use placebos. Traditionally of course, all medical drugs and products are tested using a control group.  Actual placebos are given to the control group in order to find out if the tested product is making people sick.  But in vaccine safety testing, placebos are never used.  Some other vaccine is given, or else the entire vaccine cocktail minus the viral or bacterial portion is used.

“Our goal is to get the most vaccines into the most bodies, so we learned many years ago to never compare vaccine reactions to placebo reactions.  It gets tiresome explaining to parents over and over again that the war against benign and self-limiting childhood illnesses is being fought with vaccines that kill and permanently injure many kids every year,” said Schottz.

Dr. Schottz made this special plea to reporters: “Remember, censoring the content of what you write is for the greater good of vaccination programs.  Can you even imagine what would happen to mass vaccination programs everywhere if the raw facts about vaccines got reported on a regular basis?  Your role in all this is to support the CDC and all its vaccination efforts.  No matter how reasonable, logical, and scientific all these vaccine opponents sound, we need to quickly shout them down.  Most of them are just pissed-off parents whose kids got thrown under the vaccine bus already.  They are terribly exhausted and awfully broke from taking care of their severely sickened children, but somehow they still manage to put up quite a fuss.” 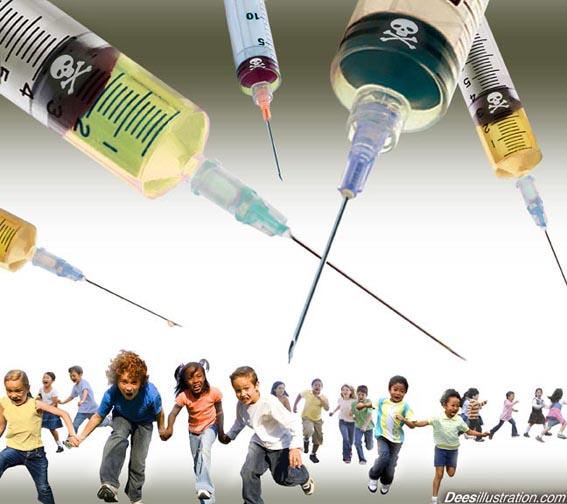