Rumors that the chemical glyphosate causes cancer and other serious health problems began circulating in 2015, when scientists for the World Health Organization announced it was a probable carcinogen.

Glyphosate is a key ingredient in Monsanto's popular herbicide Roundup, which is crucial for growing the genetically modified corn and soy needed to save the world from food self-sufficiency, and for ensuring weed-free playgrounds for children everywhere.

Concerned about the deadly effects the cancer revelations could have on Monsanto's long-term business plan to control the global food supply, then-CEO Hugh Grant quickly sprang into action.

"We struggled for years to force a retraction of the glyphosate-cancer link from the W.H.O," explained Grant, "but the word spread like wildfire we couldn't control, so we were forced to switch to Plan B. The clear trend in cancer research was to search for cures, not causes. So we jumped on the bandwagon and assembled a dream team of scientists from Monsanto and Merck to find a way to make all of humanity Roundup-Ready.

"We needed a way for people to live in perfect harmony with Roundup, just like BT corn does."

After nearly 12 years of intensive research and thousands of sacrificed monkeys, the Monsanto-Merck team finally perfected the Roundup-Ready Baby vaccine (the RRB). It's designed to be given to pregnant women to genetically modify babies in the womb, giving them lifelong resistance to the deadly effects of Roundup.

The RRB contains all the usual vaccine ingredients parents have grown to trust, like aluminum, mercury, polysorbate-80, and formaldehyde. But the usual aborted fetal cell line has been enhanced with Monsanto's proprietary gene collider technology. The genetically modified fetal cells seek out the unborn baby's DNA and gently insert the Roundup-Ready gene, which was derived from combining the genes of a GM potato with puffer fish. The result is a virtual "super-baby" who can literally be bathed in Roundup without any apparent ill effects, although some may briefly swell to twice their normal size.

The Roundup-Ready Baby vaccine was added to the CDC's ever-expanding list of recommended vaccines for pregnant women in 2037, and is required for all moms-to-be who receive any form of public assistance, or who work in schools, daycare or healthcare facilities, food processing facilities, libraries, factories or warehouses, or who may come in contact with anyone who is not a member of their immediate family.*

"Unfortunately, the RRB vaccine is only effective on unborn children," said Grant. "To compensate for the shortcomings, Monsanto has expanded its holdings significantly in the cancer treatment arena, which will undoubtedly continue to boom for years to come."

*Roundup-Ready Baby vaccine has never been tested for safety on pregnant women. But don't worry--neither have any of the other vaccines recommended for pregnant women.

Is Your Baby Roundup-Ready? 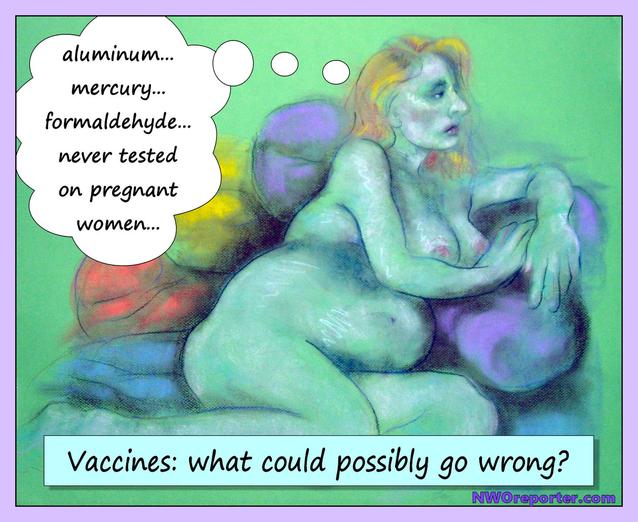