January 25, 2043
Each year, VIPs from around the globe pack up their skis and servants and hop on their private jets for a working vacation at the World Economic Forum in Davos, Switzerland.  The annual powwow provides an opportunity for Very Important Psychopaths to confer with their most trusted advisers in academia and industry about the progress of the subjugation of humanity.

This year, a gaggle of Harvard University professors had good news for the VIPs.

“We’re only a handful of generous grants away from an army of insect drones that can secretly penetrate anyone, anywhere, for any purpose imaginable,” said Seltzer.  “We’re placing our blind trust in the global overlords to use the technology responsibly – it’s the only way we can keep both our lucrative careers, and our delusion of doing good work for humanity.”

Sophia Roosth, Professor of Invasive Genetic Research at Harvard, said it is “inevitable” that the genetic information of everyone, everywhere, will eventually be on file in a massive global database.

“The economic security of academic research departments everywhere depends upon it,” she explained, “as well as lucrative private industries engaged in genetic research, for which we churn out students.  Besides, if the global cabal wants it, and the technology to do it is available, how could it possibly be otherwise?”

“With sufficient funding, we can constantly find creative new ways to spy on everyone, everywhere, all the time,” he said.  “The problem is that as soon as we come up with something new, the bad guys try to derail the global control train by finding ways to use the technology against us.  It’s going to require a perpetual supply of generous grants to stay on top of it.”

At a separate session on artificial intelligence, representatives of the high-tech industry reassured VIPs that limits on personal privacy are both widely accepted and welcomed as part of modern life, particularly by younger generations.

"At first, people found it spooky and kind of scary that it knew what they were doing and where they were going at all times, right inside their own homes.  But now, surveys show most people consider it an indispensable tool for navigating to the bathroom,” he told the forum.

Anthony Goldbloom, a young tech entrepreneur, told the same panel that, thanks to social indoctrination implemented from a very young age, what he termed the "Google generation" places far less weight on their privacy than previous generations.

"They willingly trade privacy for the convenience and sense of security a global surveillance grid provides.  They really don’t have any choice in the matter, so worrying about it only leads to unnecessary stress, as well as potential harm to industries like mine,” he said.

"People tend to behave better when they have the sense that their actions are being watched.  They need brilliant people like us to watch them for their own good, and to tell them what it means to ‘behave better’.  I’m looking forward to a lucrative career helping bring George Orwell’s visionary utopia to fruition.”

This year’s Davos retreat was not the first time Harvard eggheads have delved into the privacy crypt.  The issue was addressed as far back as 1890, when Harvard alumni Samuel D. Warren and Louis D. Brandeis wrote The Right to Privacy for the Harvard Law Review.

In those days, privacy was still alive and well and residing among the natural rights of humanity everywhere.  Surprisingly, Warren and Brandeis seemed intent on keeping it there.

At the time their article on privacy was written, new technology had just been developed that allowed photographs to be taken surreptitiously.  The threat it posed to the right of privacy was obvious, and they insisted it was up to the law to protect it.

Of course, Warren and Brandeis had no way of knowing that a global cabal of VIPs would one day manufacture terror and chaos worldwide, for which the “solution” would be a powerful global surveillance and control grid designed by the same cabal.

They could not have foreseen the unprecedented opportunities for funding this worldwide power grab would present for their alma mater.  If they had, they might have been a little more reserved in their glorification of the longstanding common law right of everyone to be “let alone”.

The Right to Privacy is an exposition on the inherent right of everyone to keep their image, words, deeds, thoughts, sentiments and emotions private, unless they choose to make them public.  The right is based on a principle Warren and Brandeis describe as the “inviolate personality”.

It only took a century of brilliant innovation and tyrannical lust to obliterate it. 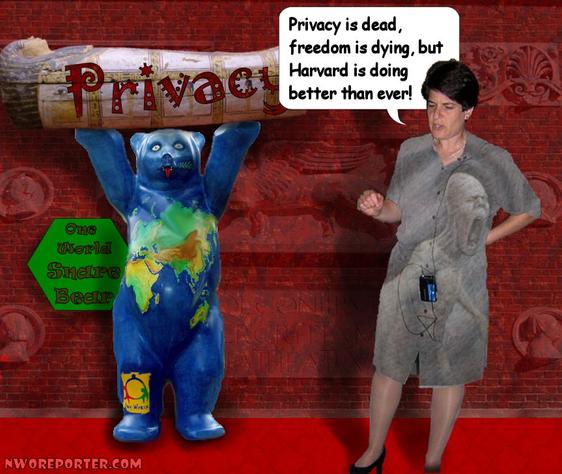