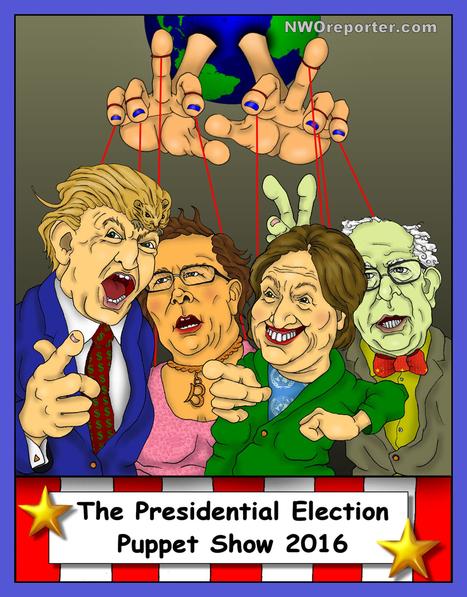 The presidential election puppet show is the traditional quadrennial event that reminds us of our important theoretical role in government. It's an opportunity for everyone, young and old, rich and poor, to dream that our solemn duty to vote really matters.

Studies have shown that over 98% of U.S. citizens are either "concerned" or "very concerned" that the rest of the population just isn't smart enough to vote for the right candidate. But don't let that worry you--sophisticated artificially intelligent voting machines ensure that the best possible candidate will always be elected. Just be sure to consult the latest straw polls before you vote, so you're not one of the losers who votes for the wrong candidate.

The upcoming 2044 election is a remake of the 2016 classic, which was so popular that the global overlords decided to recreate it, using the uploaded brain maps and stored images of the top candidates competing for high office that exciting and memorable year.

The left hand of the global oligarchy is expertly finagling Hillary Clinton for queen bee. Once known as the killer first lady of former president Bill Clinton, Hillary's running on a platform of "girl power" while bravely battling efforts by the right to convict her of email treason. In reality, it's just a clever distraction from the dynamic duo's drug running days in Mena, Arkansas, the coulda-been coup in Benghazi, and the three dozen Clinton associates who've died under mysterious circumstances over the past several decades.

Hillary's counterpart on the left is fuzzy-wuzzy champion of the little guy and global hegemony, Bernie Sanders. While everyone agrees he isn't good-looking enough to be a serious contender, Bernie has garnered a small but loyal following among Chinese nationals longing for a taste of home, peaceniks who assume he couldn't possibly be a warmonger, and the pharmaceutical lobby, who favor his staunch commitment to compulsory vaccination.

Anxious not to trump Hillary's presidential bid, the right hand of the global oligarchy thrust billionaire businessman Donald Trump into the media spotlight. Armed with a slew of controversial platforms, gallons of hairspray, and a boatload of promises for lucrative future business deals, The Donald is jetting from talk show to talk show in a frenzy of entertaining faux pas and hot button talking points.

Frustrated at his seat in the background of the Trump show, right hand contender Jeb Bush, relying on misguided campaign advice from Caitlyn Jenner, underwent gender reassignment in a desperate bid to capture the conservative trans vote. Unfortunately for Jeb, now known as Deb, the numbers in that particular voting block were grossly overestimated, apparently the result of a bug in the Straw Poll Conglomerated software.

To mix up the lineup, the next election will feature special appearances by Rand "Bland" Paul, known as the master of drab constitutional soliloquy, and "Woeful Joe" Biden, voted the candidate most likely to appear in little girls' nightmares.

Remember, the presidential election puppet show can't happen without an audience, and that audience is YOU! Be sure to take advantage of this opportunity to dream that the next four years will be a time of unprecedented hope, change and innovative solutions for whatever problems you believe are paramount.