Carbon trading insiders arrived at the Vatican yesterday in a fleet of private jets for an urgent conference with Pope Francis about increasing volatility in the carbon trading market.

Pope Francis is slated to issue a much anticipated carbon trading encyclical this summer, intended to impress upon everyone the importance of adhering to official limits on energy consumption, so as to ensure stability and predictability in the carbon trading market.

“We are at a crossroads,” said the pontiff. “Evil is driving people of the Third World to lust for air conditioning, and cars to transport produce and goods to market. People all over the globe are disregarding legal limits on gasoline and electricity use, and ignoring fines imposed on excessive consumption. The devil’s temptation begins gradually but is always growing, infecting others as it grows. This swelling of selfish independence poses an imminent threat to the stability of the global order.”

Pope Francis reassured that governments around the world are working diligently to implement emission regulations that are onerous and costly enough to rid our communities of small, independent companies that don’t have sufficient funds to stamp out their carbon footprint.

The pope has received a lot of criticism over the years for attributing climate change to man rather than God. While some researchers share his viewpoint, others point out that the climate has been constantly changing since the earth was formed, and therefore, while it may or may not be attributable to God, it is certainly not attributable to man.

Other critics maintain that Pope Francis, known as the environmentalist pope, should direct his energies to an environmental holocaust that is indisputably manmade: global contamination with genetically modified crops, and the chemical herbicides and pesticides used to grow them.

“I have met personally with representatives of Monsanto, Dupont, Syngenta, and other experts,” said the pope, "I am convinced that genetic modification of plants in the laboratory and saturation of the earth with chemicals is not only safe and wholesome, but consistent with God’s will. This conclusion is supported by numerous scientific studies and biblical analyses undertaken by GM seed and chemical producers over the last three decades.”

The pontiff reports that GM companies like Monsanto have been working hard to improve public trust by expanding operations into subsidiaries with names like Sacred Seeds International, Caring Crops Limited, and Mostly Holy Water herbicide.

When confronted with the reality of suicides by farmers whose GM crops failed to thrive, exploding rates of cancer and other diseases that were historically rare, and the demise of bees, earthworms and other small organisms essential for plant life, Pope Francis said:

“God moves in mysterious ways. Sometimes, He moves to consolidate wealth and power into the hands of a few, and to render the masses weak, sick and passive for the good of all humanity. Our duty is to carry out God’s will, not question it.”

CO2 and GMO Update from the 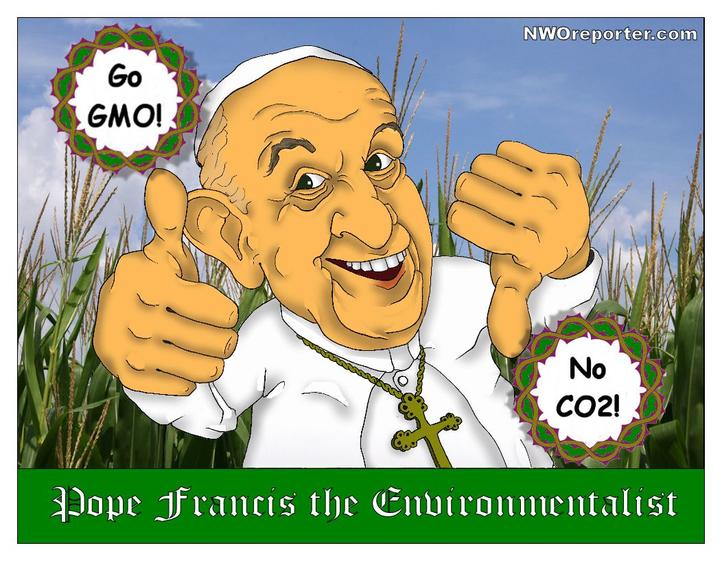