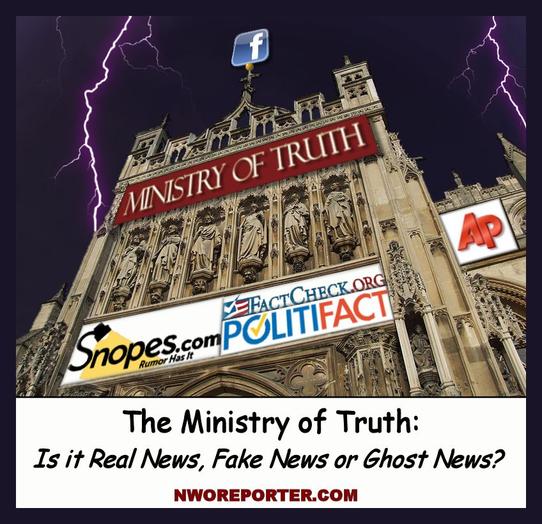 “The conscious and intelligent manipulation of the organized habits

and opinions of the masses is an important element in democratic society.

Those who manipulate this unseen mechanism of society constitute an

invisible government which is the true ruling power of our country.”

Why live in an old-fashioned constitutional republic when we can have a democracy instead? In order for democracy to work, we need our thoughts and opinions to be organized. And we need an invisible government to consciously and intelligently manipulate them, just like Edward Bernays said.

Does it really matter who manipulates our thoughts and opinions, as long as it’s done well? According to the expert fact-checkers at Facebook, the answer to this question is “no.”

Facebook’s team of fact-checkers--Snopes, Factcheck.org, ABC News, the AP and Politifact--have been sorting out real news from fake since 2016. Now, after 28 years, they have finally merged into an efficient megalithic fact-checker called the Ministry of Truth. Soon, our habits and opinions will be more organized than ever!

The job of sorting out real news from fake news is not as simple as it seems. Ministry of Truth Director Brian Washing gave us an inside look at this complicated process.

Brian Washing assured us the Ministry of Truth is committed to preserving an open forum on Facebook. No news is technically censored, although people may not actually see it. It's just categorized as Real News, Fake News or Ghost News, and managed accordingly for the convenience of users. Washing explained:

“News that is officially real, whether technically true or not, is marked with a green ‘Real News’ flag. Real News comes from the mainstream media, and is designed for our ‘manageable’ users-- the folks who believe the official story about everything. They can trust the Real News to guide them seamlessly through consensus reality.

“News that is officially fake is marked with a cautionary red ‘Fake News’ flag. Fake News comes from the alternative media, and is designed for our ‘contrarian’ users--people resistant to the organization of their habits and opinions.

“Finally, the Ministry sorts out the news which is officially not news. We call it Ghost News, and although it's often technically true, it would tend to promote disorganized thoughts and opinions. We don't flag Ghost News. Instead, we just disappear it from the news feed. It's still there, visible to the person who posted it. This strategy allows us to avoid the confrontation that could result if the news were officially censored."

Is your mind reeling yet? Good. That means the Ministry of Truth is fulfilling its mission, envisioned by the Ancient Daemon of Facebook, CIA Director William Casey:

when everything the American public believes is false."