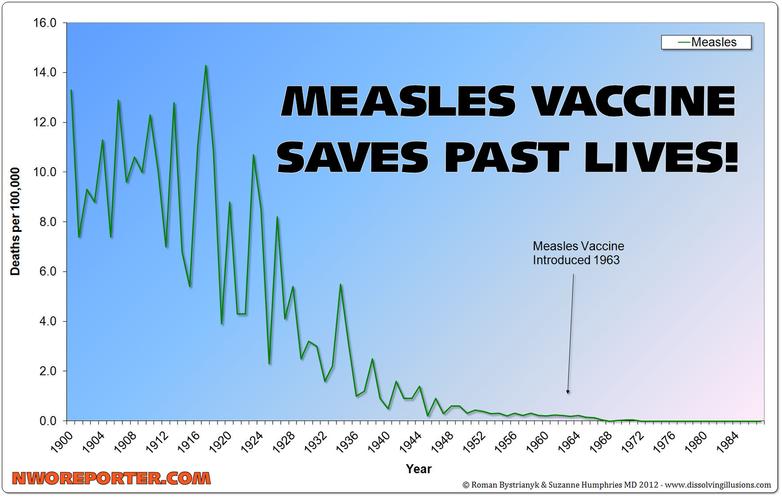 Everyone knows the measles vaccine has saved lives. It’s Settled Science, known by every school child and university professor, and backed by a mountain of expert opinions and media coverage.

Now, groundbreaking research from the University of Google at Merck has found the measles vaccine has saved far more lives than previously thought. In fact, it started saving lives decades before it was even invented.

Researchers gathered historical measles death data, and were amazed to find that deaths from measles in the US started declining dramatically by 1920, perhaps even earlier. By the time the vaccine was introduced in 1963, measles deaths had already declined by 95%.

Dr. David Bland, who headed the research team, explained this amazing ability of vaccines to save lives retroactively is known as the Prescience Effect, or PE. PE is a phenomenon whereby some vaccines are so miraculous, they actually start saving lives long before they are even invented.

“Essentially, the universe knows an amazing vaccine will one day be invented, and starts saving lives in anticipation of its existence,” said Dr. Bland. “Time is not linear, but circular.”

The Prescience Effect may be difficult to understand without in-depth knowledge of Quantum Theory, but is widely accepted in the scientific community, and is backed by thousands of complex mathematical calculations and expert opinions.

“Our finding that most of the lives saved by the measles vaccine were saved before the vaccine existed is clear evidence of the Prescience Effect in action,” explained Dr. Bland, “The PE is commonly observed with vaccines, but in no other case has the number of lives retroactively saved been so huge. Many of our parents and grandparents might never have survived childhood, had the Prescience Effect of the vaccine not saved them.”

“It’s critical we continue to develop more vaccines as quickly as possible, and that everyone takes them, in order to maximize the number of past lives saved. With sufficient vaccine production and uptake, we could conceivably reduce past deaths from disease to near zero levels.”

saved lives before it even existed