Follow @NWOreporter
JOIN OUR FREE EMAIL LIST!
Madeleine Albright:  Exalted U.S. Ambassador to the United Nations from 1993-1997; beatified first female Secretary of State from 1997-2001; typically incongruous recipient of the Presidential Medal of Freedom; and longtime rapacious board member of the Council on Foreign Relations.

Long after her overdue demise, Madge, as she was fondly known by her illustrious colleagues, is still idolized as a role model for every little girl without a conscience who dreams of growing up to achieve wealth and prestige, and to mercilessly wield the power of life and death over others.

Fawning fans of the rich and famous were delighted at the posthumous release of Madge's final tome last week, entitled My Only Regret is that it Wasn't a Million:  Memoirs of Annihilation.

The title is a reference to a famous Albright quote from a 1996 interview on 60 Minutes.  When asked whether the U.S.-led United Nations embargo on Iraq, which took the lives of more than 500,000 Iraqi children, was worth it, Albright responded:  “I think this is a very hard choice, but the price–we think the price is worth it.”

Ever the trailblazer, the unstoppable Madge had audaciously broken the cardinal rule for global overlords:  never publicly reveal your utter contempt for the masses.

"After we put Saddam into power, he went rogue," explained Madge in her new Memoirs, "so it was necessary to punish him with a mass extermination of his minions.  It was a partial success, but fortunately for our private partners in the banking and military arms industries, we still found ample pretense to wage war for many years to come."

Quirky Madge was a dilettante of subliminal messages conveyed through the brooches she wore to political functions.  Her impressive collection of pins is on permanent display at the Smithsonian Castle, along with her increasingly unsightly severed head preserved in formaldehyde, upon which visiting school children traditionally stick their used chewing gum.

Plans to restore Madge's head to its former glory have been indefinitely postponed due to lack of funding, lack of interest, and widespread revulsion.

In a fascinating peek at the complex inner workings of Madge's formerly functional noggin, her new Memoirs reveal that "[t]he brooches are supposed to reflect whatever issue we’re dealing with, or what I’m feeling like on a given day.  On good days, I wore flowers and butterflies and balloons, and on bad days, all kinds of bugs, carnivorous animals, and trinkets carved from the bones of dead babies."

Tragically, Madge was trampled to death at a Miley Cyrus concert in the summer of 2015, when hoards of screaming teen girls stampeded the stage in a frenzy as Miley licked the ass of a statue of Baphomet.

Madge's premium front-row seat quickly turned into a death trap from which her full contingent of bodyguards was unable to save her, but with her last dying breath, she was heard to whisper "the price was worth it." 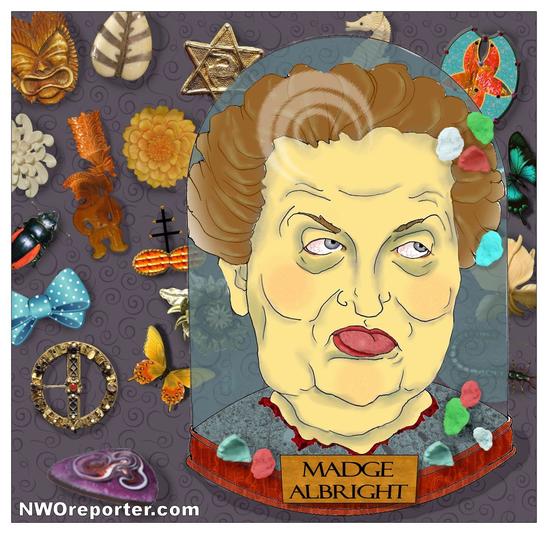