"Kids Say No to Pharma" Rebels

November 5, 2042
A highly organized gang of renegade teenagers opposing their own drugging and vaccination is causing near panic in the medical and education cartels, with doctors and psychiatrists facing unprecedented financial losses, and schools facing chaos as hoards of unmedicated students let loose with creative energy, and a slew of probing questions that teachers are ill-prepared to answer.

The subversive organization, known as Kids Say No to Pharma -- (KSNP, pronounced "k-snap") -- is headed by an illusive young leader known as "Jungle Girl".  Her true identity is shrouded in mystery, but some theorize she's a former feral child named Bruna, who was raised to the age of 12 by howler monkeys in the northern Brazilian Highlands.

Bruna was discovered by local villagers in 2037, who taught her to read, write, and weave mug rugs for 25 cents a day for the regional textile conglomerate.

In spite of her feral upbringing, Bruna proved to be an exceptionally brilliant child, often sneaking away on weekends to the library in Campo Grande to study science and philosophy.  Her troubling intellectual acumen, believed to be the result of vaccination deprivation in early childhood, caught the attention of researchers at Tulane University, who appropriated her in the fall of 2040 and brought her to the North American Union for study.  She promptly escaped, her whereabouts since unknown.

Using his extensive network of confidential informants in the rebel teen underworld, NWO Reporter contributing editor Henry Foster managed to arrange an exclusive interview with Jungle Girl, who agreed to meet with him in the basement of an abandoned nutritional supplement warehouse on the Pacific Coast.

"Our motto is 'our lives, our minds' -- and we intend to save them.  We're not going to let a bunch of brain-dead and psychopathic adults destroy our futures," said Jungle Girl, eyes blazing.

"We try to get parents on board with the natural health program when we can -- KSNP is not out to destroy families, which is what some of our detractors are saying.

"We have a group of professional deprogrammers who donate their services to help us get parents on the right track, but some of them are just too far gone.  Their minds and bodies are destroyed by a lifetime of fluoride, GMOs, television, medications and vaccines, and an educational system that trained them not to think for themselves.

"KSNP has a network of black-market nutritional companies and organic farms that provide food and supplements to help us restore our health naturally.  The kids pay for what they can with their allowances or earnings from part-time jobs, but we also rely on donations from confidential donors.

"Most kids who come to KSNP for help are on medications of one kind or another -- drugs for ADHD and ADD, antidepressants, statins, major tranquilizers -- you name it.  We have a group of doctors who've defected from the medical cartel who help kids detox from the drugs safely.  If needed, we teach kids ways to make it look like they're taking their meds when they're not.  The drugs are much easier to deal with than vaccines.

"KSNP has a library of vaccine exemption forms from the states that still allow them, and a network of inside connections and expert forgers to help us get them through the system -- but we need more.  We also teach self-defense courses to help kids facing forced vaccination, although we don't use violence unless we have to.  Many kids in KSNP would rather face grounding for life or possible arrest than another vaccine.  Unfortunately, the kids aren't always able to protect themselves, so we do our best to help them detox afterward."

Given all the powerful and heavily armed opposition, Henry asked Jungle Girl what she thought about KSNP's prospects for the future.

With a ferocity that Henry has only seen once -- when he told the CEO of PfizerGlaxo-SmithKline that his yearly bonus had been cut from $28 million to $17 million -- Jungle Girl said: 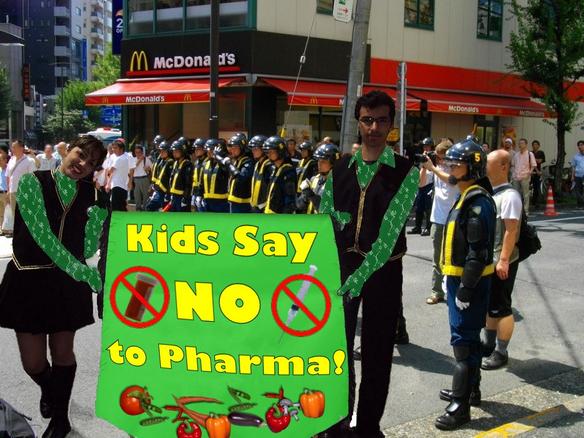