Study Shows Investigation is the Key to Vaccination Compliance

Deeply troubled by an escalating festering plague of parents refusing to follow the recommended vaccination schedule, the CDC recently commissioned an urgent study to determine the reasons for this disturbing trend.

The vaccination refusal epidemic has been so dramatic in recent years that the Global Medical Cartel reports an unprecedented plunge in pharmaceutical stocks that rivals those seen during the great market crash of 2019.

The market devastation is so severe that even several carefully orchestrated and ostensibly deadly pandemic scares in recent years have been unable to recoup the losses.

The CDC study revealed that vaccination noncompliance is tied directly to the methods of investigation parents use in the vaccine decision-making process.

Results show that parents who did not investigate before vaccinating had a nearly 99% compliance rate.  For the few who failed to comply, the main reasons given were "I totally forgot" and "I didn't know I was supposed to".

But for the parents who did investigate before vaccination, the sources of information they utilized had a tremendous impact on compliance rates.

Parents who stuck to official information sources -- sources stressing the importance and safety of vaccines -- had a 98% compliance rate, regardless of the amount of investigation they undertook.  Of those parents who failed to comply, the primary reason given was "I want to read a few more articles reassuring me that all objections to vaccines have been thoroughly debunked before I vaccinate."

It was only when parents engaged in the subversive practice of going directly to articles and studies stressing the dangers of vaccines that the compliance rate began to dramatically plummet to less than 6%.  For the parents who did comply, the most common reason given was “fear of having my child taken away by protective services.”

Surprisingly, vaccination compliance rates were lowest among parents who read articles both for and against vaccines.  Said one young mother who wanted to remain anonymous:

"I got so angry when I discovered how the pro-vaccine 'experts' had been manipulating me all these years.  I just decided it was impossible to trust anything they had to say anymore."

Dr. Obfuscation indicated that even though the Media Cartel is fully on board with the vaccine program, tried and true strategies for suppressing all but the controlled vaccine opposition are simply not working anymore.

“A large, sophisticated network of anti-vaccine domestic terrorist groups are funneling anti-vax articles and studies to militant parents,” he explained.

The CDC has yet to determine how to best combat the anti-vaccination epidemic.  We'll keep you posted as new information becomes available. 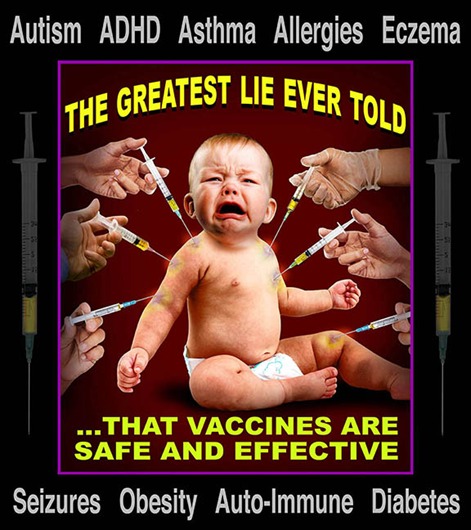