A person who questions any official story about anything.

Examples of CONSPIRACY THEORIST in a sentence:

Conspiracy theorists: They’re like cockroaches, lurking in the cupboards of civilization, ready to scurry out of every crack in consensus reality. We need to be prepared with bug spray, to keep the infestation in check.

Let’s face it--the last thing we want to hear when we’re standing in line for our Zika vaccination is some yahoo telling us the vaccine is more dangerous than the virus. Sure, smart people will know that the fact the vaccine is licensed is proof positive it’s safe and effective and will save the world. But the potential for nagging doubt is still there, and it’s a real downer for everyone in line.

Studies show that conspiracy theorists are mentally ill, but entirely unaware of their derangement. For reasons that are still a mystery, conspiracy theorists don't realize there is one thing we can always be certain of in an uncertain world: that official authorities would never lie to us.

Sure, officials in other countries might lie sometimes, especially in Russia, and Third World nations where anything goes--but not our own.

What's more, we can count on the media to provide a tight layer of protection from any possible untruths officials might try to slip by us. Highly trained teams of investigative reporters for all the major news channels are constantly lying in wait, ready to pounce on any inconsistency or flaw in the official story. Doubting any official story that has been vetted by our media Guardians of Truth is absurd to any sane and intelligent person.

Experts are still uncertain about the reasons for the mental derangement of conspiracy theorists. Several hypotheses are are being tested: an unknown contagious virus; a faulty gene, probably caused by their mother's failure to take all her recommended vaccines and prescribed medications during pregnancy; a deficiency of fluoride in the diet; or perhaps even an extreme deprivation of television.

If you have the misfortune to encounter a conspiracy theorist, the best bug spray is aggressive contempt and ridicule; or, for the more tender-hearted, pity. Just remember that, like cockroaches, conspiracy theorists might startle you, or even frighten you, but they can’t really hurt you. Not unless you listen to them.

Under no circumstances should you attempt to reason with a conspiracy theorist. Experts warn they have a pathological immunity to logic, and are completely unfazed when logical arguments are presented, such as:

These solid logical arguments fly right over the heads of conspiracy theorists, who often respond by imploring us to actually examine evidence that official sources assure us has been thoroughly debunked and discredited.

As rational people, there is nothing we dread more than being slapped with the label of “conspiracy theorist.” But it’s actually very easy to avoid this humiliating situation. Whether you’re discussing politics, economics, education, banking, science, medicine, or social justice, just keep your bug spray of contempt handy, and always stay within Google distance of Snopes. There's no better source than Snopes for the official story about everything.

Stay vigilant, because you never know when a conspiracy theorist might scurry through a crack in our carefully manufactured reality.

The Infestation of Conspiracy Theorists:

Are You at Risk? 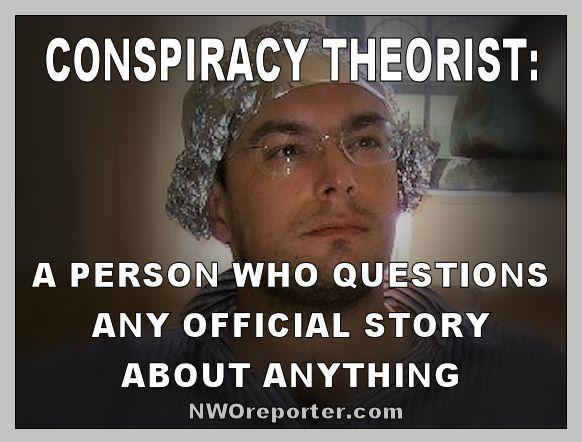