“Money can buy you immortality, according to the Russian internet multi-millionaire who is ploughing a fortune into a project to create a human that never dies. Web entrepreneur Dmitry Itskov is behind the ‘2045 Initiative’, an ambitious experiment to bring about immortality within the next 30 years by creating a robot capable of storing human personalities. The group of neuroscientists, robot builders and consciousness researchers say they can create an android that is capable of uploading someone’s personality. Mr Itskov, who has made a reported £1bn from his Moscow-based news publishing company, is the project’s financial backer. ‘Different scientists call it uploading or they call it mind transfer. I prefer to call it personality transfer’ – Dmitry Itskov.” (The Telegraph, 3/13/16)

Winston Smith, the hero of Orwell’s 1984, has just been arrested for crimes against the State. Sitting in his cell, he watches as a familiar figure steps through the door. It’s O’Brien, the man he thought was his friend. But O’Brien is an undercover agent of the Party, and the Party rules all.

O’Brien: Don’t worry, Smith, I’m not here to wring a confession out of you or torture you. We’ve updated our methods. We have new technology. We can preserve the life and essence of every human now. This is our mission: to save, to improve, to transform.

Smith: What are you going to do?

O’Brien: We’re going to take your essence, your personality, which is your brain, and we’re going to transplant it into a new body, an artificial construct. Some people would call that construct a robot, but it’s really an advanced bio-machine. It’s programmed to operate correctly in the new society.

O’Brien: In other words, those choices your brain might make which are counter to the purposes of the Party…those choices will be nullified by the bio-machine.

Smith: So I’ll live on, but without freedom.

O’Brien: Exactly. You’ll be you, but you’ll be integrated with the collective. That’s our sales pitch.

Smith: Suppose my brain isn’t my essence or my personality?

O’Brien: Oh, we know you’re more than your brain. We know every human has dimensions of consciousness and power the brain can’t touch. We don’t publicize that fact. It’s a State secret. But we SAY your brain is you. We promote the idea.

Smith: But you can control my brain.

O’Brien: Correct. It’s a processing center, so to speak, and we can monitor what it does and stop it from acting in ways we consider harmful.

Smith: What makes you think I’ll be there at all after you take out my brain and put it in a bio-machine?

O’Brien: You won’t be there. We know you won’t be. But we say you will. It’s another aspect of our State propaganda. It eases people’s fears. We assure them they’ll live on. We tell them they and their brains are the same thing, if you follow my meaning.

Smith: And they buy that idea?

O’Brien: Of course. They’re not very thoughtful. If we said the individual and his consciousness were more than the brain, people would be confused. So we stick to the basics.

Smith: There are people who actually believe they will live on because you take their brains out of their bodies and install them in a bio-machine?

O’Brien: They do believe it, trust me. Getting them to believe it took many years and a great deal of scientific gibberish. Anyway, you’ll lie down on a table, we’ll anesthetize you, remove your brain, transfer it to a bio-machine that looks like you, and then activate the brain. A new version of Winston Smith will stand up and go about his life. Except now, instead of being a rebel, he’ll be a member of the Party, loyal and trustworthy. And you? You’ll be gone. Who knows where?

Smith: Suppose you transferred my brain but didn’t put a monitor and limiter on it? What would happen then?

O’Brien: The bio-machine would more or less act like you—the rebel. It wouldn’t be you, of course, but it would be a reasonable facsimile. An imitation, you might say. With far less imagination.

O’Brien: We know that. We know you’re beyond your brain, which is to say, you’re beyond any form of matter. But we don’t care. We only care about creating an imitation of you.

Smith: And that imitation would walk around and interact with other imitations you’ve created.

Smith: And you’ll call this immortality.

Smith: And the scientists who are working on this project?

Smith: Why are you admitting this to me?

O’Brien: Because I like you. I consider you a friend. I could have ended up like you. But I saw which way the wind was blowing, and I joined the Party.

O’Brien: Would you expect anything less?

Smith: I guess not.

O’Brien: Those of us in the core of the Party are the greatest secret society the world has ever known. Why? Because we understand that The Individual is not made out of matter at all—and yet we operate as though he is nothing more than a small amount of matter inside his skull. Do you see?

O’Brien: All right, if you want to put it that way.

O’Brien: Yes, that’s what our algorithms tell us.

O’Brien: That is our assumption as well. But wherever you go, whatever you do, it won’t affect us. We’ll carry on. Our empire is the physical world.

Smith: I see a massive crack-up coming in your world. Robots going crazy. Machines fighting other machines. They’ll be unconscious, but they’ll leap outside your control.

O’Brien: What makes you say that?

Smith: Intuition. The robots will come after you. You won’t be able to stop them. You’ll be running Earth like a giant mental ward. Those operations always go haywire. They’ll destroy you…Then we’ll come back. We’ll pick up the pieces.

Smith: You may not be here, but wherever you are, I have a feeling you’ll see it. And we’ll recognize you.

Smith: No. When we recognize you, you’ll experience the most real thing that’s ever happened to you.

O’Brien: So the war is never over?

Smith: It’s over when we win.

O’Brien woke up in a sweat. He was lying in the dark. He got up from his cot and searched for a light switch. He couldn’t find one. He felt the walls of the room. They were blocks of stone. High above his head, he saw a skylight. The glow beyond it was faint.

Where was he? What was the date?

“This is ridiculous,” he said. “What is this place? I’m just a neuroscientist working for the National Institutes of Health. I’m not O’Brien. This isn’t 1984. I want to achieve immortality for human beings. I just want to transfer their brains into artificial bodies, for their own good. What’s wrong with that? I’m a humanitarian. The government sponsors my research. I’m a doctor. I help people.”

I write a new ending to Orwell's 1984 reprinted here with permission of the author. 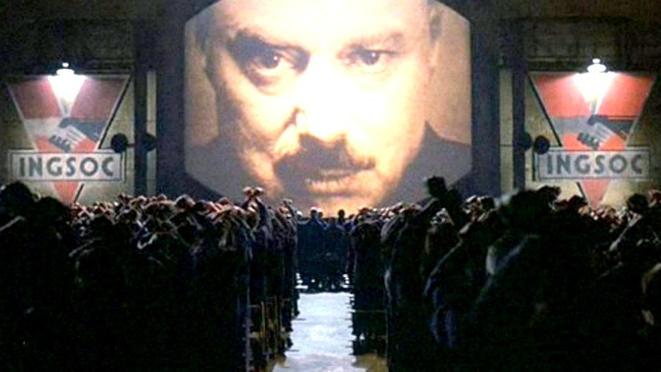