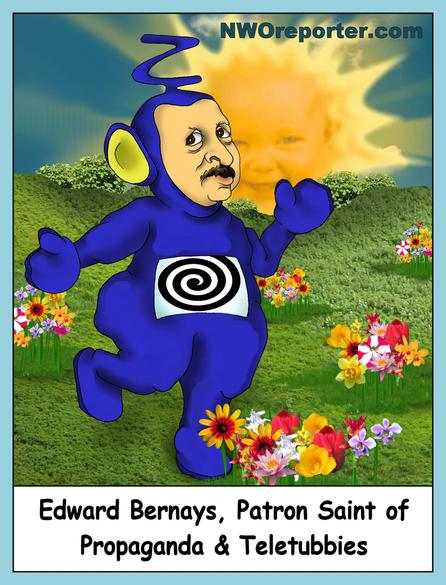 In Teletubbyland, you never know what will happen or who you’ll meet—but you know there will always be lots of hypnotic fun with Dipsy, Tinky-Winky, Laa-Laa and Po! And the mesmerizing babbling and gibberish is about to get a whole lot better, because Edward Bernays, known as the “father of modern propaganda,” has just been canonized the new patron saint of propaganda and Teletubbies!

Saint Eddie (born November 22, 1891, died March 9, 1995) had a long and lucrative career serving the needs of the rich and powerful to dictate consensus reality. He pushed another father of modern propaganda out of the way for his title, but poor Mr. Ivy Lee didn’t stand a chance of canonization anyway with an unfortunate nickname like “Poison Ivy.”

Saint Eddie is the author of many holy texts, such as Propaganda and Crystallizing Public Opinion—books that continue to reap profits for his heirs, train his disciples, and infuriate anyone else who reads about the tricks being used to control their minds.

According to Saint Eddie’s holy writings, we all consent to rule by “invisible governors” by virtue of being born, although it’s best if people don’t actually know it. Then they can feel confident that their beliefs and opinions are entirely the product of their own keen brain power. “I believe it; therefore, I’m right” has become the new mantra of the modern day thinker.

Thanks in large part to Saint Eddie, no longer does our beloved shadow government need to rely only on the sword to achieve world domination. Instead, they can depend on television, Hollywood, the media and ELF waves to wage bloodless battles for the minds of the people. As Saint Eddie decreed in Chapter 1, Verse 1 of his book Propaganda:

“The conscious and intelligent manipulation of the organized habits and opinions of the masses is an important element in democratic society. Those who manipulate this unseen mechanism of society constitute an invisible government which is the true ruling power of our country.”

Saint Eddie is revered for elevating social control to an art form, and it’s never too early to introduce children to Bernaysian art. He didn’t live long enough to see the baby mind control revolution, but we’re certain he would have loved Teletubbyland, where tubby toddlers live free of parental guidance, in blissful togetherness with their robotic pleasure machine Noo-Noo and constant surveillance by Voice Trumpets.

Saint Eddie’s canonization did not come without controversy. His family and devoted followers raised objections that Teletubby vestments were not befitting a man of Saint Eddie’s dignified stature. But following extensive negotiations that included a 24 hour Teletubby marathon and a gourmet buffet laced with Xanax, his disciples were willing to agree to just about anything.

Be sure to join your little ones for the next exciting episode of Teletubbies, where all your favorite tubbies will bake cookies for breakfast, take a trip on Tinky-Winky’s tummy to see Divas Las Vegas with Frank Marino, and in a spectacular finale, give their beloved new patron Saint Eddie the best simulated head of his life!