Dr. Mary Gatter, President of the Planned Parenthood Medical Directors’ Council, achieved infamy back in 2015, when she was secretly recorded haggling over the sale price of aborted baby parts.

"I want a Lamborghini," Gatter said in the video with a charming laugh. What better way to support women's health and the noble cause of science than driving the most expensive status symbol on the market?

According to confidential sources, Dr. Gatter had her eye on the Lamborghini Aventador Coupe, with red leather interior and full electric adjustable heated seats, carrying a price tag of $397,000.

Within a few years, Dr. Gatter was retired and no longer contributing anything useful to society or her bank account. But to the disappointment of her heirs and the general public, she continued to live on and on, draining her comfortable fortune and collecting her Social Security checks.

As Planned Parenthood founder Margaret Sanger might have said, Dr. Gatter was fast turning into one of "those human weeds which threaten the blooming of the finest flowers of American civilization."

But as luck would have it, the market for human tissues had rapidly expanded, and there was a growing demand for not only the tissues of fresh unborn children, but also for "after market" tissues from soulless and shriveled old specimens like Dr. Gatter. These bargain-priced tissues were widely used for Third World experimental pharmaceuticals, pet foods and novelty items, and replacement organs for the desperate of modest means.

Concerned that the value of her tissues was rapidly deteriorating, Dr. Gatter's heirs contacted a top after-market organ harvesting firm for an expert consultation. They were alarmed to learn that if Mary lived much longer, the proceeds from her tissues would scarcely cover the purchase price of a used Ford Pinto, widely considered the least desirable vehicle ever made due to its tendency to burst into flames.

But to their relief, the value of Dr. Gatter's tissues could triple, or even quadruple, if she were placed on life support immediately, and her tissues harvested as needed when purchase orders came in. Once fully harvested, she could potentially yield enough to buy a used Vega, or even a Volkswagen Beetle fixer-upper.

"We really wanted the Beetle," said a Gatter family spokesman, "it was the favorite model of famous serial killer Ted Bundy, and we felt it would be a fitting tribute to Mary's life work."

The family quickly went into mourning in preparation for Dr. Gatter's premature demise, and with the help of a bottle of Hennessy, three Ambien tablets and a baseball bat, they were well on their way toward their vehicle purchase.

"We're grateful that Mary will have the opportunity to die as she lived," said the Gatter family spokesman, "dedicated to science, and the best possible vehicle human tissue can buy." 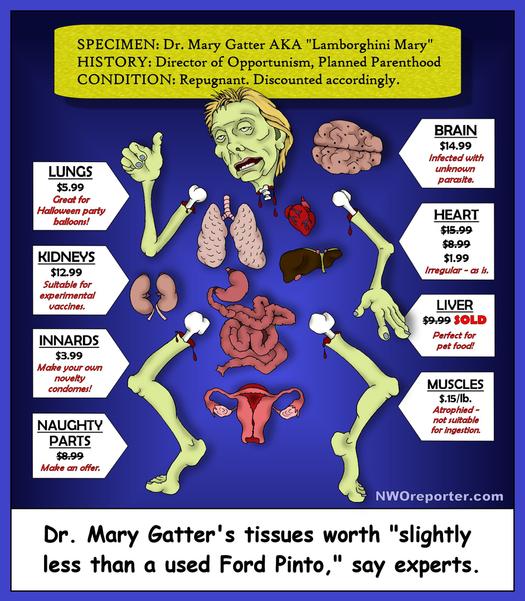