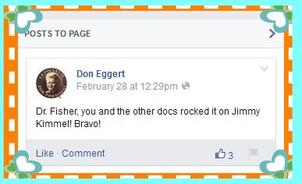 Ever since the Rockefeller Foundation appropriated the field of medicine in the early 20th century, one truth has become self-evident:  Nature didn’t have a clue what it was doing when it designed the human body.  Drugs, vaccines, genetic manipulation—these are the only hope to save the human race from the ravages of evolution, or the grievous mistakes of creation, depending on your perspective.

Nevertheless, a persistent crowd of miscreants continued to tout the mysterious powers of the body to heal itself, given the right conditions, well into the 21st century.  In an effort to conquer this scourge on the noble profession of Rockefeller medicine, a television script filtered down from on high at pharmaceutical giant Merck in the winter of 2015, eventually making its way into the hands of once beloved late night talk show host Jimmy Kimmel.  The script featured real doctors, all itching to sling obscenities at anyone with the audacity to question their judgment.

In those days, physicians were deeply troubled because so many parents were questioning whether injecting their children with four dozen vaccines by the age of 12 was really a good idea.  They were spending hours upon hours researching vaccination, and asking probing questions doctors simply couldn’t answer.

Realizing the issue was one of profound importance for human health and wellbeing, doctors diligently consulted their books, and came to an inescapable conclusion:  vaccines were absolutely critical to their bottom line.  Something had to be done, and mocking people with vaccine concerns on late night television seemed like the obvious answer.

Public reaction to the skit was less than desirable, but as the old saying goes, any publicity is good publicity, so producers ran with it, creating a spin-off called The Doctors and Kimmel Show Live.  The title proved to be a prescient bit of irony, since in the end, it heralded the death of the careers of virtually everyone who appeared on it, including poor Jimmy.  After a run lasting less than a single season, the once popular talk show host spent the next 25 years doing stand-up at children’s birthday parties and bar mitzvahs just to eek out a meager living.

Dr. Danelle Fisher, who appeared in the original Jimmy Kimmel skit, recalled the aftermath of her 15 seconds of fame.  “I knew I shouldn’t have worn my f***ing name tag.  Westchester Pediatrics cleared out like a badger den after a skunk visit once the show aired, and we had to hire a fulltime team to patrol our Facebook page to keep out the nasty comments.  Producers said the show would make me beloved and famous like Dr. Oz, but all I got was a big fat pain in the f***ing a** and a sh*tload of hate mail.  I was so pissed.”

The Doctors and Kimmel Show Live featured a stellar cast of REAL clown doctors each week, using a clever combination of profanity and snide derision to address important medical concerns.  The scripts were easy, since the science had all been settled decades earlier.  The show delved further into the folly of questioning vaccination, and covered other pet subjects of science denialists, such as deadly nutritional supplements, the wonders of water fluoridation, and the amazing health benefits of glyphosate.  A regular segment called New Kids' Drug of the Week garnered a small but devoted following among insomniac social workers and middle school counselors.

Floundering ratings, a chronically egged studio, and mountains of hate mail made the show’s run short-lived, along with a string of unfortunate audience outbursts unsuitable for live television.  The kicker happened when a team of lawyers stormed the stage to serve a citizen’s petition charging Jimmy and his medical cast with facilitating crimes against humanity.

Objections to the ambush fell on deaf ears.  “We spent four f***ing years in undergraduate school and three f***ing years in law school,” said the outraged lawyers, “the last thing we need is some freaking cast of clown doctors telling us how to practice law!”

"Even after we pulled the show, Jimmy was still too hot to handle,” recalled producers, “we decided to take the snarky disdain factor down a few notches, and begged Jay Leno to come on board as a late night replacement.  We had to pay him a sh*tload more than Jimmy, but in the end, it was well worth it.” 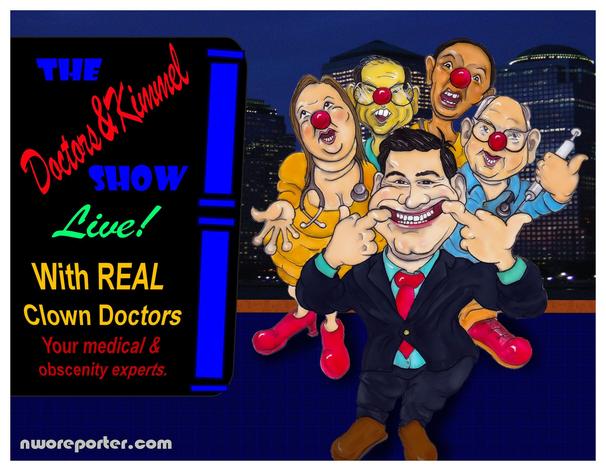