The movie is a big hit, but the stars of The Green Eyed Monsters are not enjoying the warm glow of the limelight. Instead, they are scrambling for cover on their private islands, and slithering into their underground bunkers.

Apparently, the most successful and admired psychopaths in the world prefer to slip gracefully under the radar, wearing $30,000 suits and mingling with their own kind in exclusive clubs like the Bilderberg Group.

The Green Eyed Monsters takes us deep inside a shadowy underworld of humanoid predators plotting to conquer the world. As the movie unfolds, we discover a series of shocking revelations about the Bilderbergers and their twisted motivations.

We discover that the Bilderbergers, although appearing to be human, are actually predators in disguise. All are missing the fundamental quality possessed by true humans: a conscience. Without it, they are guided only by self-interest and an utter contempt for humanity—or so it seems.

The Green Eyed Monsters climaxes with an explosive discovery: hiding underneath their veneer of contempt for the masses lies the real force that drives the Bilderbergers: the green-eyed monster, jealousy. At their core, they are driven, not by self-interest, but by a profound envy of amazing human powers that have long been deliberately suppressed. In order to rule the world with impunity, the Bilderbergers must continue to suppress those amazing human powers at all costs.

Pundits from the field of psychology, anxious to lap up the publicity the Bilderbergers shunned, are taking turns vilifying The Green Eyed Monsters as an amateurish exploration of the psyche.

“The term ‘predator’ is nowhere to be found in the Diagnostic and Statistical Manual, the book that serves as the psychiatric bible,” said psychologist Dr. John Mayde. “My colleagues and I had a good laugh at their fabricated term. Obviously the script writers lacked proper training and qualification as apostles of the psychiatric word.

“The correct term for a person lacking a conscience is ‘antisocial personality disorder’—it sounds so much kinder and gentler. And one cannot simply assume that orchestrating wars, poisoning communities, bankrupting nations and the like is a sufficient basis for a diagnosis of antisocial personality disorder. A proper diagnosis can only be made after a thorough evaluation by a qualified mental health professional, like myself.”

According to Dr. Mayde, antisocial personality disorder can actually be a good thing for those with the lineage and connections to wield it properly.

“People with anti-social personality disorder often excel at getting things done,” said Dr. Mayde. “When it comes to manufacturing the fear, confusion, conflict and uncompromising force needed to subjugate humanity, possessing a conscience can be a serious hindrance. Numerous studies have shown that not a single person who possessed a conscience has ever ascended to the level of global overlord.”

Green Eyed Monsters lead script writer Ether (a pseudonym), who lives in hiding off-grid to avoid what he calls “dying funny”, is unconcerned about the criticism.

“I don’t need a bunch of boot-licking shrinks to tell me how to identify predators or what to call them,” said Ether, “my only interest is in exposing and getting rid of them to save the human race. And I’m not too concerned if their boot-lickers get caught in the crossfire, either.”

We asked Ether what he hoped the take away message of the movie would be.

“That’s up to each individual to decide,” he said, “but ultimately, my hope is that everyone who sees it will realize they don’t much like the taste of fine Italian leather.” 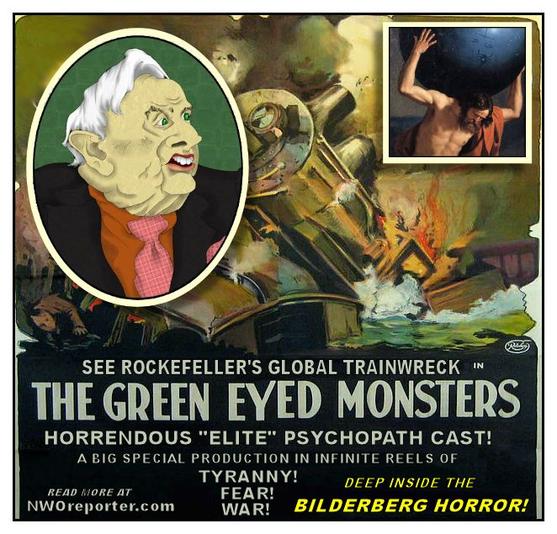