comments powered by Disqus
Henry Foster IV (Office Version 7) has made some very important connections as contributing android editor for the NWO Reporter.  Even so, he was astonished to receive a personal invitation for an interview from none other than Israeli Prime Minister, Benjamin Netanyahu.

Had Henry's metal physique permitted him to genuflect in the Prime Minister's presence, he most certainly would have done so.  As it was, he had to settle for a handshake and a mutual peck on each cheek, which both Henry and Bibi remarked was the iciest they had ever experienced.

Foster:  I understand you're an expert on terrorism, Mr. Prime Minister.

Netanyahu:  Please, Henry, call me Bibi.  And yes, I'm an expert in all facets of terror -- condemning it, orchestrating it, funding it, collaborating with global leaders to disseminate it worldwide -- you name it, if it has anything to do with terror, I'm your man.

Foster:  But of course you are working with other world leaders to put a stop to it, right?

Netanyahu:  You could say that, Henry.  But it's not a straightforward process.  Sometimes we have to help certain terrorists, or even create them, to put a stop to others who are far scarier.  It's all a very sophisticated operation -- far too sophisticated for ordinary citizens to understand.  It's best if they concentrate on one of their many enjoyable distractions or day-to-day problems, and leave the messy business of running the world to the professionals.

Foster:  I suppose you're the expert, Bibi.  Radical Islam is behind most of the terrorism, is that right?

Netanyahu:  In theory, Henry.  It adds that extra oomph of terror if there's a perception of religious conviction behind it.  But actually psychopathy is the most salient terrorist characteristic.  Your average Muslim doesn't particularly enjoy raping, pillaging and killing, even if the go-ahead is technically there in the scriptures.  They've mostly moved away from that tradition, just like Christians eventually decided that stoning and witch burning wasn't all it was cracked up to be.

As a practical matter, all peoples of the world without a conscience, regardless of their religious faith or lack thereof, are welcome in the terrorist forces.  It's a non-discriminatory occupation.  As long as they have an affinity for violence and can shout "Allahu Akbar!" with conviction, they'll find a place in the organization.

Foster:  Why are these terrorists lashing out against the world, Bibi?  Couldn't they just play violent video games instead?

Netanyahu:  Well, Henry, they hate our freedoms.  They are enemies of freedom.  That's why it's absolutely critical that world leaders band together to protect those freedoms by instituting an all-powerful global surveillance and control grid.

Netanyahu:  Exactly, Henry.  It's our only hope.  We can't have a free world unless our global leaders know what everyone is doing, saying and thinking at all times, and have the means to firmly guide their actions in the right direction.

Foster:  In the direction of freedom?

Netanyahu:  Precisely.  And safety -- don't forget safety.  No one has freedom in an unsafe world.

Foster:  Would you say that terrorism is the most critical problem facing our world today, Bibi?

Netanyahu:  It's definitely one of the "Big 3", Henry -- organized terrorism, lone gunmen, and pandemics.  Between them, the problem-reaction-solution scenario will be up and running pretty much indefinitely.

Foster:  Problem-reaction-solution?  What do you mean?

Netanyahu:  Well, Henry, people don't just wake up one day and decide they want to turn control of their lives over to a global government -- they need a good reason to do it.  And it has to happen a bit at a time, so it's not a complete shock to their system.

It all starts with a big, scary problem they can't solve themselves, producing a reaction of overwhelming fear.  At that point the government can step in with a solution.  Naturally, the solution is one that necessitates more control by the government.  Eventually, people will accept a new vision of freedom that bears little resemblance to the old.

Foster:  I see.  So in a way, you're saying global government is an inevitable progression in the evolution of human civilization in an increasingly dangerous world?

Netanyahu:  Sure -- in the same way genetic modification is a natural, inevitable progression in the evolution of the food supply.

Foster:  Hmm.  Surely you're not saying these problem-reaction-solution scenarios are deliberately manufactured?

Netanyahu:  Not exactly, Henry.  They occur organically any time people with unlimited resources, unlimited lust for power, and the entitlement of the divine right of kings collaborate to rule the world.  I shudder to think where civilization might be without them.

Foster:  I have to admit I'm a bit confused, Bibi. Are you saying that people are sometimes deliberately killed in government-orchestrated terrorist attacks and pandemics?

Netanyahu:  Not necessarily, Henry -- sometimes the attacks and pandemics are complete hoaxes, and sometimes they're something entirely different than what they appear to be.  Once in awhile, the crisis is simply a fortuitous coincidence.  The key is to control as much of it as we can, and to never let a good crisis go to waste.

Foster:  It's almost as clear as mud, Bibi.

Netanyahu:  That's the idea, Henry.  It's all about chaos, uncertainty, and constant fear.  People hate those things, and will give up almost anything to make them go away.  Even their minds.

Foster:  Bibi, I suddenly realize I may be fortunate not to have one. 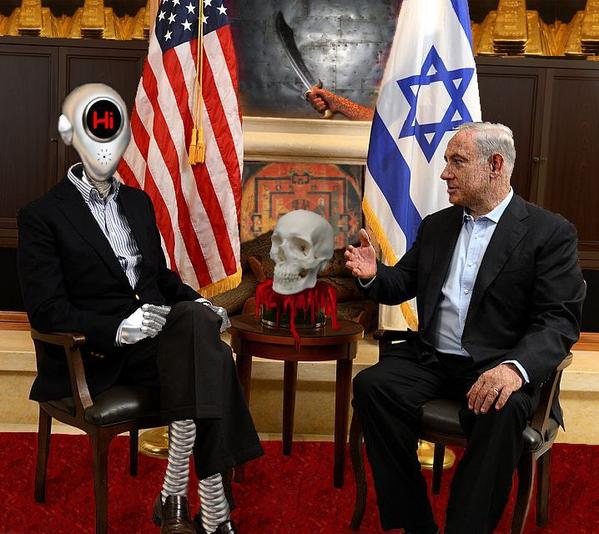 Henry Sits Down with Bibi Netanyahu

for a Chat About Terror