“You see it wasn’t just a planet, it was a portal. That was the thing it took me so long to figure out. But when I finally did, I walked through it. Easy as pie. And then I was somewhere else.

“Somewhere that made no sense at all. There were…things there, but I couldn’t identify them. I couldn’t put names to them. I’d never been in a situation like this before.

“I thought it might be a puzzle. A game. But what were the rules? There didn’t seem to be any. I was lost. So I just started walking. I don’t know how long I walked. You tell me I’ve been away for eleven months. All right. But it doesn’t feel like it. I can’t put any sort of time stamp on it.

“One thought came in on me, over and over again. I was in a different universe. I felt that very strongly. And if it was organized, I couldn’t find the pattern. I looked, believe me, but I couldn’t find a two and two that would make four.

“So for a very long time I rejected the whole place, the whole setup. I spent a lot of time rejecting it, saying no. I became dedicated to refusing to believe there was nothing I could identify or describe. Do you know what I mean? I couldn’t put words or ideas or feelings to that place—so I refused it. I negated the whole layout forcefully. That was my main experience. Because who would ever suspect he could be put in a landscape where things were so strange he couldn’t find a single word to convey them to anyone else?

“And then, finally, I remembered something. From my college days. A professor of mine took me to a theater, and there was a play being performed by these crazy actors. They spoke in a language no one had ever heard of. It went on for almost three hours. I felt myself getting very angry. A few minutes before the end, I was hit by lightning. I suddenly understood everything they were saying. I don’t know how. And I couldn’t translate it back into English. I just understood. It was a one-time experience. And that was what it was like, being in that universe on the other side of the portal.

“When I remembered this, I felt a shift. I knew where I was. I knew what was going on. I knew that universe. But I can’t sit here and tell you what it was. That seems impossible to you. But it’s true. I’m stymied. One thing I can say. Everything I once thought I knew about beauty…that’s gone out the window. I’ve realized there were certain rules in my mind. Not rules exactly. Maybe principles. Principles of harmony, symmetry, balance. Organization. I was living according to those rules or principles all my life, in all my choices, and now they’re gone. They don’t exist anymore. When they evaporated, I was able to understand what that universe was. All at once.

“On the trip home, I started to paint. You’ve seen my work. You’ve looked at it, and you wonder whether you can use it to decipher what happened to me. What I saw. But you can’t. I was just inventing out of a vacuum. A wonderful vacuum. It wasn’t about what happened on the other side of the portal. I was painting spontaneously.

“I was working from nothing, a void. It’s quiet there. You can improvise endlessly.

“I’m not asking you to understand it. I don’t feel you need to.

“I just know I stumbled across something. I never wanted it or looked for it. You’ve told me the paintings mean nothing to you. That’s fine by me. I didn’t do them for you.

“All the vast telemetry we have? The codes and symbols and shorthand, the measurements? The markers and the baselines and the scans? I’m not interested in them anymore. I don’t have the slightest bit of interest.”

There was silence in the room.

“No,” the astronaut said. “I had religion before. Now I don’t need it.”

“I feel,” the astronaut said, “like a tiger who just walked out of the zoo.”

Security men stepped into the room. They had their guns out.

But the ops chief held up his hand.

“It’s all right,” he said. “We’re fine. This man found something we should all hope for. Let him go. No one will understand him. We’re protected. We’re inside our world of protocol.”

Astronaut Debrief reprinted here with permission of the author. 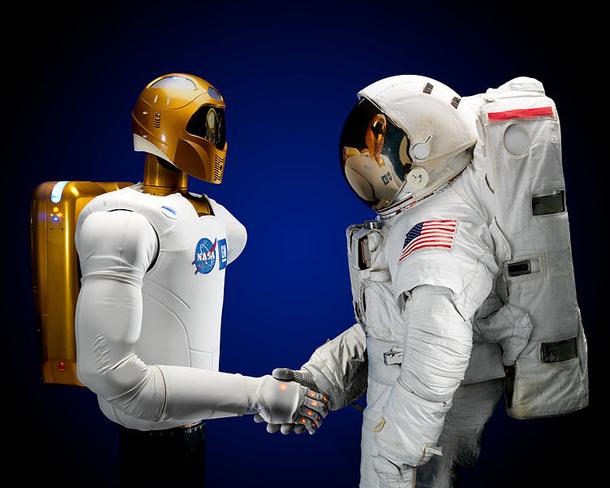