Guilty! the Judge said, and it was over.

The charge? Maintaining that his work was his own, that he had done it himself, that he had made the choices and invented the words and imagined the whole thing, whatever it was, the novel, the poem, the play.

What it was, was not on trial. Nothing to do with the message. No, it was all about attribution.

Because the great spiritual merger had already taken place. The masses had undergone enlightenment, and the government had seen it—actually, seen TO it—and then declared that artists could face jail time for pretending to be what many of them said they were:

Individuals. Inventors. People who did things in their own rooms, privately, out of view, by their own means.

This was now verboten. Because it had been established that the whole human race, no one excepted, was tapping into the very same great consciousness, and whatever was in the world emanated from THAT experience.

So the judge had no need to deliberate. It was simple. This artist, whoever he was, and it didn’t matter who he was, was guilty. He claimed he had created his work. He’d insisted on it. In fact, he denied the Great Merger, said he was no part of it. He opposed it on several grounds. One, it was a fanciful delusion, and two, even if people were actually melting into one another, he didn’t have to. He could stay right where he was, in his own room, alone, and he could turn out his work.

The sin of pride. The sin of ego. Quite distasteful.

The artist was transgressing against the human race. He was by deed, word, and attitude, denying the final ascension to Unified Infinite Consciousness. He was saying no to that, over and over. He was revolting against the truth. He was spitting on the Messengers of Peace.

This needed punishment. Society had to censure him, had to deny him the right to turn out new work, unless he righteously admitted he was just a channel for it.

“My subconscious,” he said, “is abiding in the Oversoul, and there it asks for knowledge, and knowledge is granted.”

He made a pilgrimage to the Monument of the Eternal Smile at the Arizona Yoga Mat Hotel and Entertainment Complex and fasted for 13 days. He titled the introduction to his opus: We’re All in This Together. He stated in no uncertain terms that we are all little dots in the sea of energy and consciousness, and art is merely an expression of that condition. Nothing more. Ever. “No one person achieves anything,” he wrote. “We must cling to that. Not only as a political fact, but as a spiritual revelation.”

He stated, “I ask nothing for my work. I abdicate ownership. I surrender. In the past, I suffered from spiritual constipation, but now I have let go.”

In his Epilog, Letting Go and Moving On, he praised Bright Day III, our new president, for his work in ushering in legislation confirming the discovery of One World Self.

“Just as government consents to new scientific discoveries,” wrote the monk, “it now affirms spiritual ones. The President is the expression of our collective thought, and therefore his election was inevitable.”

As the judge in the trial described how the monk was an example of what a real artist should be, the defendant in the case stood up and said, “Your Honor, before you pass sentence on me, I have a question. Will there be boundaries on what people, any people, can do in the privacy of their own homes? Since I’m going to jail for producing my art, I was just wondering whether other prohibitions will soon follow.”

“As a matter of fact,” he said, “there is pending legislation to outlaw certain kinds of independent research, on the grounds that it takes a person away from the Universal Body. So much of a spiritual and political nature is now settled, unfunded research amounts to meddling with Unity. Why should we allow it?”

The defendant sat down. He said, “Can I think my own thoughts?”

“You see,” the judge said, “that’s your problem. You insist on your contemplations, as if they were private possessions.”

“All due respect, Your Honor, but I just like to think.”

“More than your freedom from imprisonment?”

“And apparently one you’ve already made.”

The artist said, “You know, there was a time when a person who used the word ‘magic’ as a term of approbation could be excommunicated, even tortured, because he was said to be on the side of the Devil.”

“Nonsense,” the judge said. “We are all magic, together.”

The artist said, “I deny the right of this court to pass sentence on me.”

“Obviously,” the judge said. “But your opinion has no effect. I could sentence you to six years’ hard labor in a camp in Alaska. Instead, I’m going to have you live in a padded cell for two years with a group of rebel artists. You’ll sort out your problems and basically do what you do. CBS is organizing it as a new reality show. It’s called When Spiritual Evolution Fails.”

“Your Honor,” the artist said, “how can you sentence me when you don’t really believe I exist as an independent person?”

The judge wagged his finger.

“Don’t try to pull that one on me,” he said. “You’re a piece of energy that has broken off from the whole. That’s all.”

“But how? Through my own choice? If so, I have freedom. And that means I am I.”

“No it doesn’t. Some force ultimately pushed you out of the hive.”

The artist shook his head.

“Review what you’ve been saying to me, Your Honor. You’ve been accusing me, an individual, of free and willful behavior, immoral choices.”

“It’s a convenient way to speak, nothing more. When we get around to changing the language, and we will, all references to individuals will be eradicated. Eventually, the kind of thing you write will come across as gibberish. No one will understand it. It will drop like dead leaves from a tree.”

The Artist on Trial reprinted here with permission of the author.

The Artist on Trial 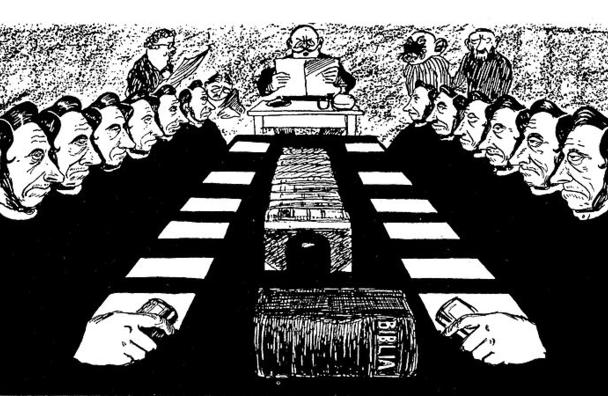